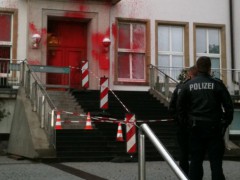 What does it take to get someone to attack an academic building? Apparently the answer is “organize a high-level conference”.

Last month, Kiel University’s Institut für Weltwirtschaft (Institute for the World Economy) had a window smashed and had red paint splashed across it. A group calling itself “The Incorrigible Anti-Capitalists” claimed responsibility saying they were opposed to the Institute’s organizing the Global Economic Symposium (GES). The latter brings together academics, businessmen and politicians to talk about the world’s problems for two days.

On the day of the GES itself, some fifty protestors in black marched from the central station and setup shop in front of the conference building wielding flags of the Deutsche Kommunistische Partei. A speaker then gave a speech – in German so its full meaning escaped me, but the words “Kapitalismus”, “Finanzkrise” and “Karl Marx” appeared frequently – before giving way to rap from their van’s speakers.

Their motivation? To “protest against the neoliberal ‘Global Economic Symposium’,” according to one of the leaders’ Twitter account. So the GES takes its place beside the World Economic Forum, the Bilderberg Group and the WTO as one of the big bad boys of international capitalism.

Ironically however, the tone at the GES was actually one of rather mixed feelings at the course globalization has taken. In his speech opening the symposium, Kiel Institute President Dennis Snower ominously quoted Ecclesiastes

Vanity of vanities, said the Preacher, vanity of vanities; all is vanity. What profit hath a man of all his labor which he takes under the sun? One generation passes away, and another generation comes: but the Earth abides forever.”

Snower warned this was no longer true, fisheries, freshwater and other resources were being overexploited to the extent that “We are witnessing the domestication of planet Earth.” At the same time, this grave environmental danger was pursued even for the sake of “wealth not spread equitably” and as the rich-poor “gap continues to grow”. Hardly a note of ultra-capitalist triumphalism.

There is no doubt the protestors and the GES organizers would have differed on the solutions to these problems. However, both had the ambition of combining analysis of the world with the changing of it.

Communists have always vaunted their ability to combine theory and practice, to the extent that Marxism is often called “the philosophy of praxis”. In their way the protestors were trying act out the young Marx’s beautiful phrase “Philosophers have interpreted the world in various ways, the point however is to change it.”

I can’t say they were living up to this great ambition. It’s amazing to think of such an unreconstructed movements not simply because times and issues have changed to some degree, but also because of its ineffectiveness. Is there a political tendency that has been more ineffectual in the West since 1945 than the radical left? Surely six decades of nothing but noise-making is fairly damning in itself.

However, one shouldn’t sneer too much, very few have been able to combine thought an action: Between the academic’s lofty thoughts and the politician’s opportunistic day-to-day there is a chasm that is rarely bridged.

The GES too is an attempt at praxis: a research institute’s bringing together of the university and policymakers. The organizers aim for the GES to be “a research-based solution forum, not a discussion forum.”

However, inevitably here too we can be left wondering what effect it will have. BBC presenter Declan Curry introduced the GES’s final panel joking “We’re going to fix the world in 60 minutes.” Sergio Gabrielli, the head of Petrobras, commented on the panel’s subject matter with scepticism “A ‘holistic approach to future challenges’… In the plural. It’s impossible!”

And indeed, perhaps especially given the international and interdependent nature of the world’s problems today – environmental, social, economic and cultural issues constantly interacting – one can easily think any attempt at change is Herculean.

One can rarely draw a direct line between an idea’s inception and its implementation. It is more diffuse. As ministers, CEOs and professors thrash about their ideas, some of them seep through into politics and corporate practice. In the 1990s, few ruling politicians talked about well-being as against GDP, about growing inequity, or sustainable development. Today these items are on the agenda because of, among other things, conferences and protests small and large.