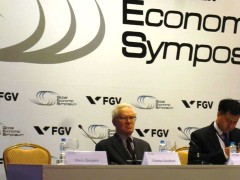 The following article deals with the topic “The Future of Central Banking: Inflation Targeting vs. Financial Stability,” which is currently being discussed at the Global Economic Symposium in Rio. The author intends to enrich the discussion at the symposium with his personal stories and ideas.

Professor Charles Goodhart was one of the participants in the GES 2012 “The Future of Central Banking: Inflation Targeting versus Financial Stability” panel. He served as a member of the Bank of England’s Monetary Policy Committee from 1997 to 2000 and became Emeritus Professor at the London School of Economics in 2002. He formulated what is widely known as “Goodhart’s law,” a description of a kind of “observer effect” typical to social sciences:

“Any observed statistical regularity will tend to collapse once pressure is placed upon it for control purposes.”

Goodhart’s law seems to me a very smart and humbling idea, and it comes to my mind every time I hear about explicit targets for economic variables, such as inflation and the recent idea of NGDP targeting. I had the chance to ask him three questions I judged most relevant in the current debate on central banking:

“Definitely not,” was his short answer. “Inflation targeting was very successful and is still necessary,” he said. According to him, there’s no conflict between the way most central banks in the developed world have been acting (keeping interest rates at very low levels and expanding their balance sheets) and inflation targeting. He still sees deflation as the most salient risk and believes central banks could easily fight inflation if prices start to rise at a pace faster than desirable. “If central banks stop buying government debt, markets would enter a tailspin,” in his words.

2. Do you think the policy of very low rates in the developed world has anything to do with capital flowing to emerging countries? Are there “currency wars” going on?

He thinks monetary policy does affect international capital flows, though causation is not quite clear, and it’s very hard to isolate one of the components. As Ben Bernanke recently stated at the IMF meetings in Tokyo, he believes emerging countries would be much worse off if the Fed and other central banks were not trying to tame the effects of a global economic depression. “The recovery in the United States improves Brazil’s current account,” he said, “though I understand both sides on the argument.”

3. In light of Goodhart’s law, how do you see the idea of nominal GDP targeting?

“Nominal GDP figures are problematic,” he said — subject to constant revisions, and he thinks most of the world can’t make sense of GDP deflators (“sometimes I can’t understand them,” his words). So, for the sake of simplicity, he would stick with the good old inflation targeting regime — “consumer price indexes are much easier to calculate and understand.” He doesn’t believe in any major breakthrough in this area.