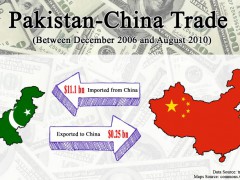 After the free trade agreement between Pakistan and China was signed, increased industrial profits were expected on both sides. While more and more of these expectations have been met for China, Pakistani industries are struggling due to an imbalance in trade.

The China-Pakistan Free Trade Agreement has provided Pakistani consumers with extremely cheap Chinese products and has also made it feasible for middle class men to start up their own local stores and businesses. However, this agreement’s adverse effects are much greater and can be seen in Pakistan’s industrial sector.

Most of the Chinese imports into Pakistan are low-quality finished products; many Pakistanis also think that China “dumps” all its faulty products in Pakistan. On the other hand, Pakistan’s major exports to China are raw materials like cotton, leather, and marble, which are processed into finished goods in China and then sold back to Pakistan at much higher prices. Other Pakistani exports to China include agricultural products like fruits and vegetables — which help Pakistan’s economy to some extent but are totally not worth the harm that massive imports from China cause in return.

Below are a few photo collages from some Pakistani markets, where traditional products have been largely supplanted by Chinese products.

Chinese motorcycles cost almost half the price of the Pakistani-made motorcycles. Out of twenty bikes I counted in a parking lot, only one was a Pakistani brand — the rest were all Chinese.

Electronics are another major import into Pakistan from China. From widescreen televisions to pocket-sized music players, literally every product is stamped “Made in China.” Due to the smuggling of many of these products, there are no taxes involved in the trade cycle, and hence these items are sold at unbelievably cheap prices in the Pakistani markets. Such cheap prices keep Pakistani entrepreneurs from introducing their own electronics, as they cannot afford such competitive prices.

According to the estimate of a retail phone seller, almost all of the mobile phone accessories in Pakistan are imported from China. The extremely low quality phone accessories that are sold to Pakistani customers are so inexpensive that without any regrets, they can be thrown away if found faulty.

. . . And these are just three of the many Pakistani industries that suffer due to unfair trade between the two nations. To save its own economy, Pakistan needs to export more finished products into the Chinese markets. Otherwise, it is unlikely that Pakistani industries will be able to survive in the face of China’s huge industries, which run at economies of scale, producing products at unbeatable prices. Moreover, border control between the two countries needs to be strengthened so that all the heavy taxes can be collected properly.