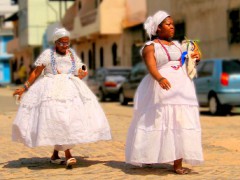 This post was produced for the Global Economic Symposium 2013 to accompany a session on “Can Religion Help Solve Global Problems?” Read more at http://blog.global-economic-symposium.org/.

In 1999, during a hot spring week, as weeks usually are in Bahia, Brazil, Gildásia dos Santos e Santos began to live her last months on Earth – but she didn’t know that yet.

Mãe Gilda, as she was known, was a religious woman. She was a follower of a religion called Candomblé, which has African roots and is very common in her home state. She wore a big, beautiful white dress with colorful necklaces, as Candomblé women traditionally do.

In that hot spring week, a protestant newspaper called Folha Universal published a slanderous article. The headline read, “Charlatan Macumbeiros harm the pockets and the lives of clients” (Macumbeiro is a pejorative way of referring to followers of African religions in Brazil). Next to the headline, printed on the first page, was a photo of Mãe Gilda. When she saw it, she was shocked and felt so outraged that she had a heart attack and died a few months later.

Fortunately, justice was done. Her life and her story were not in vain: January 21st, the day she passed away, became Brazil’s National Day Against Religious Intolerance and has been celebrated since 2007.

Mãe Gilda’s story provides an example of how politics and religion can intertwine: the newspaper was sued in the judiciary, laws were created for the protection of religious freedom in the legislature, and Mãe Gilda’s day was sanctioned by the executive. In this case, politics helped religious believers. Can it work the other way around? In other words, can religion help both believers and nonbelievers?

Marina Silva is a politician in Brazil. She is well known for several reasons: as an environmentalist, a minister, a former rubber tapper, and a former presidential candidate. Also, she is Protestant.

During a debate, Marina talked about her opinion on religion, politics, and prejudice. “I never suffered prejudice when I was Catholic,” she said, “but I do suffer because I’m Protestant. . . . Once, during a debate, someone looked at me and said, ‘I thought you were so intelligent, but now I see . . . you’re Protestant.’”

As a politician with a religion, Marina celebrates the secular state and reminds us how religion helps believers and nonbelievers alike:

It’s a shame that people have forgotten that. It was the Reformation that introduced the idea of ​​the secular state, because at one time there was an official church sanctioned by the state, and that was a significant factor in causing the Reformation.

Coincidentally, both Marina and the newspaper Folha Universal represent a Protestant viewpoint. But, clearly, they don’t express it in the same way. Marina celebrates the diversity of religions in Brazil and defends those who do not believe: “Brazil does not have an official religion. And that’s good for believers and nonbelievers. It ensures both the rights and freedom of believers and those who do not believe.”

As clichéd as it may sound, talk about religion in the twenty-first century is still necessary. Most people believe in something bigger than themselves; nevertheless, they still fight against each other in the name of (their) God.

Are politicians who are religious good for a country? How can the religious syncretism in Brazil be used for common good? Does the fact that there are varied beliefs in Brazil make it easier or more difficult to promote interreligious cooperation?

Questions like these are why the Global Economic Symposium 2013 brings this important topic to the table, asking: can religion help solve global problems? I will be blogging about this topic, and I’ll try to answer these questions using my perspective as a Brazilian and a believer. For now, I leave you with two more questions: do you think that God’s law often becomes the law of the land? If so, is this a good thing or a bad thing?