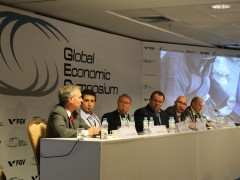 The following article deals with the topic “Tackling Inequality of Opportunities,” which is currently being discussed at the Global Economic Symposium in Rio. The author intends to enrich the discussion at the symposium with her personal stories and ideas.

This subject is so hard to write about because the problems are interconnected, and so are the solutions. In a global community it doesn’t get any easier. As good as the current solutions may be, they still tend to be a one-dimensional approach. The multi-dimensional approach, which focuses at least on economic, psychosocial and justice aspects of the individual, seemed to reflect a consensus at the discussion, not only among the speakers but also in the audience.

The absence of any type of “minority” so to speak was notable. There was no one in the room who seemed to have overcome a situation of poverty in the past. Before I would have questioned that fact, but nowadays I have started asking myself another question: what makes these “privileged people” so different from others? What is it about them that is so rare that there is no one here who suffers from poverty? On the other hand, we must also be grateful that these privileged people are dedicating themselves to a cause that does not directly impact their lives.

The room where the discussion took place was filled with those who belong to the wealthiest 10% of the population. Among them were Latin Americans who were discussing the problems of those whose incomes may be a mere 4% of their own. In a world that is supposed to be driven by individualism, there were 50 important individuals who appeared to be free of egoism.

So . . . why do they care when so many of their peers do not? The answer came at the end of the conversation.

Accessibility and participation marked the panel | Photo by the author

I say “conversation” because that is what it was — everybody had the chance to contribute an opinion, be it by raising a hand or writing on Twitter (the discussion was available to stream online). These were people who were actually able to jump across the wall dividing social classes and live in the other reality. Our society has plenty of these invisible walls, and we can live without ever seeing the other side. Of course, as one of the panelists pointed out, to have a fair world, teachers would have to earn fair salaries, and theirs would be the most valuable profession there is.

But volunteering has actually saved these individuals from the common line of thought — from egocentrism, and from being able to think of nothing but themselves. So what did these individuals who concern themselves with tackling inequality of opportunity think we need to get to a more fair society?

We under-invest in early childhood. Giving more attention to this, the most important stage of human development, will create more focused, confident, creative adults. What actors should be responsible? The government (by guaranteeing good schools), the schools themselves, and families. As I said before, there is no easy answer; there are always multi-disciplinary answers. It is a question of “and . . . and,” not “or . . . or,” as one contributor pointed out. Investing in the early years greatly reduces costs for the government, which then does not have to invest nearly as much in playing “catch up.” Thinking about health, for instance: preventing health issues in utero can avoid many costs for the government once the baby is born.

There must be a means of measuring performance; there is no other way to improve. Even if it is a challenge to make information available to the public, we must be diligent in doing so in order to know where we are and where we are headed. Comparison between countries was a delicate topic, but another panelist made a good point: it is up to the citizens of each country to make sure that their people can function at a high enough level to compete in the global community.

Then the discussion moved from the role of government in making changes to market incentives for change.

Aaron Shoresman, winner of the Open Solution challenge, submitted online the best remedy for inequality of opportunities and came to Rio to present it | Photo by the author

A young man, who had contributed a proposal via the GES’s Open Solution online workspace, discussed a market incentive designed to mitigate problems stemming from the recent grab phenomenon. His proposal is to create a certification scheme similar to certified fair trade or certified organic. In order to obtain the certification, agricultural development firms would have to meet criteria including offering training to host-country nationals (ideally people from nearby communities) to work on the development project and eventually the farm and supporting businesses. Additionally, development firms would be required to dedicate a minimum percentage of their expected profits to local projects designed to improve food security, livelihoods and education, among other things.

As similar as it is in developed countries, it is a shame how far away the rest of the world is from this level of organization. Maybe when we have made more progress towards transparency and accountability, we will actually have a chance of working in partnership with all of the private sector and not just the few who understand themselves to be important actors in the health of society.