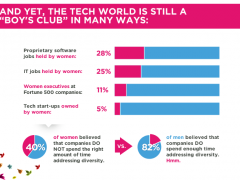 The following article deals with the topic “Implementing Board Diversity” which will be discussed at the Global Economic Symposium in Rio this October. The author intends to enrich the discussion at the symposium with her personal stories and ideas.

I’m not going to say here that women are still facing the same problems as always. But, also, I don’t want to lie to you and say that now that we can work, study and vote, everything is great.

When there are more women studying, and yet they are not making as much money as men, we can tell: there’s something strange here. And I’m referring not only to Brazil, the country I’ll write from, but also to the whole world.

A bunch of people I know (including fellow women) work in great places. As great places, I say they have their rights as workers respected: they earn their salary every month, they can take paid vacations, and even get health care, maternity leave, etc. Many have women as bosses, and some of my women friends also are bosses.

So, why do I think women are the elephant in the room? Why am I talking about it in the first place?

In October, many people around the world are coming to Rio de Janeiro to discuss global challenges and solutions at the Global Economic Symposium. One of the themes is called Board Diversity and Corporate Governance. How, in a so-called society, can we bring more diversity to corporate boards?

“Elephant” may sound a bit strong here, but sometimes, that’s how it seems. According to the infographic made by Women Who Tech:

– Among individuals holding professional jobs in the U.S., 56% are women

Now, here it is the ironic part, since the infographic is called “Women rule in tech”:

That’s what I call a big elephant in the room. Women study, women vote, women work, women make decisions, half (or more) of the population in the world are women, they can grow babies inside them (!!!) and, yet, they live in a society ruled by men. Still.

To deny that is hypocrisy, in my opinion. To think it’s OK to have only men as CEOs and women as secretaries is sexism, in my opinion. That’s why, also in my opinion, I’m looking forward to knowing about what solutions the GES 2012 can bring.

Brazil has its first woman as president. I think it’s a great time to talk about women and leadership. Now and then, I used to ask some questions of friends, family and coworkers. I highly encourage you to do the same, wherever you live:

– How many women work in your job?

– How many of them are bosses, if there is one?

– Why? (I always ask why, since the answer always is the same, as you will see…)

To finish this post, I want to leave another thought for you who thinks that there are few women in leadership positions just because they “have” to leave their jobs because of kids and family: who said women have to stay home to do that? Who said that only women can raise kids and take care of a family? Ask a German, man or woman. He or she may answer the same: both of them can do that. That’s why Germany offers to the family a period of 6 months to 3 years (only the first year is paid) for maternity leave, which can be split between both of the parents.