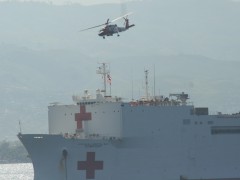 Amid the dire tragedy of the 2010 Haiti earthquake, I was completely in awe of the world’s response. We seemed to be throwing every possible resource we could at saving lives and healing wounds. The logistics were challenging, as Haiti is an island country whose infrastructure was largely destroyed. And so I marveled at such technologies as the US Navy’s hospital ships. We have hospital ships? Fascinating.

US hospital ship in Haiti. Source: US Coast Guard

A few years earlier, the disaster was on America’s coast. When Hurricane Katrina flooded New Orleans, many countries offered assistance to us. While we didn’t take much from other countries, much domestic assistance was deployed from around the United States.

US Coast Guard sent from Florida to New Orleans after Hurricane Katrina. Source: US Navy

This geographically distributed approach is a hallmark of modern disaster response. In short, when conditions in one place become sufficiently severe, it is expected that people from other places step in to help, even if that means crossing international borders. We might think of this as a sort of insurance system, in which our inter-regional assistance prevents things in any one region from ever getting too bad. Here it is essential that governments have good relations with each other. Otherwise they may shun assistance, as happened after the 2008 Cyclone Nargis in Myanmar. In general, we can expect democracies to be much more likely to accept international assistance than totalitarian regimes, since distressed populations can be expected to want their leaders to accept help.

Inspired in part from a series of thought-provoking emails with Bob Ross of the US Department of Homeland Security, I have come to fear what happens during geographically widespread catastrophes. What happens if a large portion of the United States, or a large portion of the whole world, faces disaster all at the same time? If the disaster is sufficiently widespread, then there may be no opportunity for help to come in from elsewhere – regardless of what types of government are found around the world. Each disaster zone would be on its own to attempt to recover and rebuild. At a minimum, the recovery would be slower and less effective. More people would die. More buildings would fall apart. The disaster would be more disastrous.

It’s important to be clear about the sorts of disasters that could be so geographically widespread. Many of the usual ones simply cannot. This includes natural disasters like earthquakes and hurricanes, as well as human-made disasters like the 9/11 and 2008 Mumbai terrorist attacks. These disasters are inevitably confined to limited geographic regions. To be sure, indirect effects of these events can be felt worldwide, such as the impacts of 9/11 on global air travel. But these indirect effects do not prevent a geographically distributed disaster response efforts.

Instead, the types of disasters that could be more widespread are disasters like infectious disease outbreaks or large-scale nuclear weapons exchanges. These events have the potential to simultaneously devastate many regions worldwide, and to do so so severely that it would overwhelm our ability to respond. As such, they fall into a special class of disasters and merit special treatment.

What can be done about these global disasters, if the usual response paradigm doesn’t work? The key here is that each affected area must be prepared to handle its own situation. Self-sufficiency is crucial. Thus the efforts of groups like the “preppers” in the US may prove invaluable. The preppers are communities of people who are taking their own initiative to become self-sufficient in times of crisis. While they may seem paranoid to the rest of us, if something happens, they may be the best positioned to survive. But the preppers community, though growing, is still a small minority. Some form of local self-sufficiency needs to be spread more widely so that more people can survive a global disaster, especially people in large metropolitan areas who can’t easily start growing their own food. And in addition to the basic needs of food, clothing and shelter, this self-sufficiency should include the ability to be self-sufficient in governance. We need to be prepared to rebuild our democracies.

It’s important to note that no one really knows what would help in the event of a global disaster. We’ve never been through something like this before. Ideas like those of the preppers are just that – they’re ideas. And they might not be the best ideas that we can come up with. With more study and more effort, we can probably come up with better ideas and better programs. Doing so should be an important priority for people in all areas, given how much is at stake.