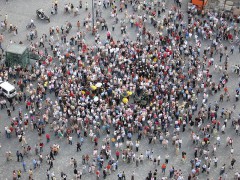 When my parents moved to Australia with me as a screaming baby in tow, the situation in Sudan was dire, true, but it was much more an economic and socio-political decision rather than one of safety. This type of migration is increasingly common, particularly to a migration based nation such as Australia. How a nation and its people – as well as migrants themselves – deal with these global flows currents of people will define attitudes and perspectives of our current generation and generations to come.

I describe myself as either a “global citizen” or “mongrel”, both labels of which I am proud. What exactly does that mean though, for me personally, for many others in similar situations and for our society as this becomes perhaps the norm?

From a purely economical point of view, there is no doubt that migration, particularly skilled and business based migration, is of great importance and benefit to a society. The introduction of policies such as 457 visas (officially known as the Temporary Business (Long Stay) Visa), which allow Australian companies to sponsor employees from overseas has allowed for the development of sectors where skills are required, for example the oil and gas industry. Australia is no stranger to migration by any means; more than a quarter of the population in 2011 was born overseas, we speak more than 260 languages and identify with more than 270 ancestries. With the ease of travel this century and the relative stability of our economy compared to the global status quo, it is no wonder that more people are looking to cross the oceans to call this land girt by sea ‘home’.

If we are to look at this from a cost-benefit point of view, there is no doubt that what is gained from migration – an increase in labour supply, national income, skills, development, cultural depth, awareness and exposure, heavily outweighs any perceived disadvantages; identity crises, housing and services, the cost of humanitarian arrivals (although this is an international obligation), possible rise in community tensions due to a lack of understanding leading to changes in social cohesion.

It can be said that from that point of view as well, Australia is lucky in the sense that it only stands to gain skills from migration. By and large, we are not suffering from the ‘brain drain’ affecting other nations; our Net Overseas Migration (NOM) is 232 000 (497000 arrivals and 265000 departures, ABS and DIAC projections, 2012). It should be noted that NOM is the net gain or loss of population through immigration to Australia and emigration from Australia.

Although the drivers and immediate economic benefits are known and recognised, the effects on the socio-political landscape are those that are more often talked about, highlighted and debated. Migration can be seen as a purely economical factor perhaps, however we must not forget that we are dealing with actual people, who have hopes, dreams, desires and families. Migrants not only bring economic impacts, but their very presence changes the fabric of communities, and it is this change that can turn the tide of opinion. Economic factors are enough to convince a company perhaps, but “not in my backyard” is also a term used…

A cursory look at headlines over the past year or two clearly indicates that migration and identity are in the forefront of people’s minds. The discourse hasn’t always been friendly:

Migration challenges the people of a nation fundamentally, to understand their own identity and what is unique about their ‘national’ identity. It also challenges those migrating to think about how much of their new home they will embrace and how much of their ‘old home’, cultures and traditions they will cling on to. Ever since the onset of globalisation, the question of identity has been asked, and it is one still being debated – Australia being no exception.

Australia is a nation based on multiculturalism, and we have a great untapped resource in our cultural diversity. It is important that we appreciate the value of our migration and cultural diversity, capitalise on its benefits and ensure that we do not neglect the socio-political effects that it has. We must ensure the communication lines are always open between migrants and those who have been settled for generations, and that we provide the space for young people to discover and mould their own identities to find the balance between their heritage and their current environment in a manner that is comfortable and familiar to them. It isn’t something that will happen overnight or be ‘resolved’ but more one that will change over time as influxes and migratory patterns change.

This level of cross cultural pollination has never been seen in history before, so we are at a unique point in human civilisation where we can create and mould identity based on more than just an accident of birth location – we almost have the choice and freedom to form whatever identity we want. What effects will that have on our society as a whole? Who knows yet. It could mean that nationalism no longer has the same power that it used to, or that it becomes based on something other than race, birthplace or religion. It could mean that cultures become based on hybrids of existing national traditions… who knows? All I know is that it is within our control.

Migration is not a crime, by dkalo on Flickr, CC BY SA 2.0

The irony is never lost on the Indigenous population – apart from them, we are all migrants to Australia. So who is anyone to deny the benefits of a concept that brought them there in the first place?