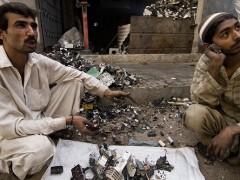 After perusing many reviews on impact of globalisation on raw material production, I conclude that it has had a negative impact on the economy of Pakistan, which has also borne the brunt of domestic political instability and foreign intervention in the ‘War on Terror’. In line with the WTO’s policies, lifting tariffs on imports and exports, along with other policies has caused a drop in fiscal revenues which has choked government development programs. According to the latest reports, Pakistan loses 800 billion rupees a year in tax evasion’s – and this is income which I believe  can aid in development and poverty control in any country as it enables the government to subsidize the industries of the poor and to provide standard health, food, and living facilities to the people. It is a general perception in Pakistan that globalisation has contributed to ‘making the rich, richer; and the poor, poorer’. Even though the increase in global demand of raw material has also increased its production but the poor has a very little benefit in the whole game.

Another effect of global trade on national realms is that the increase in the international price of raw materials (rice, wheat, cotton) has lead to an increase in their wholesale price in Pakistan, causing a slump in domestic demand and leading to a loss. According a research article, this process caused a loss of consumer surplus of Rs. 19,482 million for wheat and a loss of consumer surplus of Rs. 1,190.54 million for rice. This created a win-lose situation for Pakistan’s rural community. As exporters and purchasing countries garnered considerable financial benefits, the rural community suffered from its inability to purchase products for their own use at a higher rate.

By the same token, if Pakistan purchases finished goods like (machines, aircraft etc), it has to pay huge amounts which disturbs the balance of trade and puts a burden on the economy. The country shifts to borrowing money and hence must follow the financial policies of the lending country or institution. Consequently, the rate of inflation has shot up in Pakistan and life has now become so unaffordable for the poor that the basic necessities of life like food and shelter are fast becoming an unrealizable dream. Natalya Naqvi in The Express Tribune sums up the unfortunate IMF effect on Pakistan’s economy in her article “IMF and us.”

So, whether the globalisation is a zero sum game for Pakistan or not, is a question with various nuances. On the one hand, yes, globalisation has had many positive effects as money accumulated in the pockets of the industrialists and business community; it also helped the country to become technologically advanced. Yet on the other hand, the poor, who make up 70 percent of the country’s population, have lost out badly!  So, the government needs to reflect on how to balance the situation by keeping the good things of globalisation and replacing the negatives with positive solutions. This is very much needed if Pakistan is to become a developed country one day!