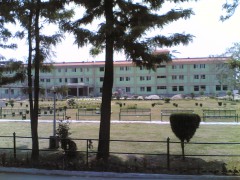 According to the  CIA World Factbook unemployment in Nepal stands at 46% (2008 est.), up from 42% (2004 est.).  Some recent estimates put it at around 40% – a staggering statistic to comprehend- almost half the working age population is unemployed.

Nepal’s job crisis is largely due to a near continuous cycle of political upheaval, poor economic policies,  and an inability to tap into local and regional resources coupled with a dysfunctional law and order situation. Even after the the end of the Maoist led insurgency in 2006, and the signing of a comprehensive peace accord between the major political parties that promised a new beginning, the country’s economy still seems unable to shake off its troubled legacy and forge a new path ahead.

The gloomy economic outlook has forced many to seek opportunities abroad – mainly in the Middle East, and the Gulf states. Saudi Arabia, Qatar, Bahrain and the United Arab Emirates are home to thousands of Nepali migrant workers – mainly men but the number of women workers is also on the rise. Such large scale migration of its working population is a major source of revenue for the country’s economy. New data from the World Bank shows that Nepal is 6th highest remittance receiver in the world with 20% of its GDP dependent on migrant workers (2010 est.) But is this a sustainable solution to the job crisis? Parts of the country are already feeling the unpleasant socioeconomic ripple effect as they deal with the lack of job seekers which puts  families and the local way of life under duress. Reports of laborers mistreated, abused and forced to work in harsh conditions only add further to the dilemma.

Export of labor is clearly a short term solution. Opportunities for young people have to be created at home for sustained economic and social growth. In the light of Nepal’s poor manufacturing infrastructure and energy deficiency, investment in more human and knowledge intensive sectors such as Health Care could well  provide fast relief to the current job crunch.

However, both the Government and the private sector have invested substantially in training high level medical professionals such as doctors, dentists, surgeons, and pharmacists. According to Dr. P Ravi Shankar, a faculty member at a medical college in Nepal:

“Informal interactions with students in my school reveal that many intend to migrate to developed nations after graduation. Studies are required on whether private school students are more likely to emigrate compared to government school ones. Private, self-financing students constitute a large proportion of the student body. In Nepal around 70% of medical students are self-financing. The implications for the health system of a large number of doctors emigrating have to be studied. Private school students staying in the country are more likely to work in urban areas and specialized institutions. This was my impression on interacting with students and from my preliminary analysis of a study conducted by me and other authors on student perceptions about working in rural Nepal after graduation.”

A large part of investment goes towards training financially secure students in urban areas who do not see unemployment as an issue that could affect them. Rural students with limited resources are being left behind.They are also the ones  affected by the inadequate health care infrastructure that exists outside of the major urban centers in the country. Focusing on training rural youth in lower to mid level health care positions (using regional hospitals for more specialized care to maximize available resources) can solve the care gap experienced by the rural population and also create opportunities at the local level. It is also a wise investment as the training-employment turnaround is short.

Organizations like the Council for Technical Education and Vocational Training – an autonomous national body – and various private institutions play a major role in pushing this approach forward. Government support through tax breaks, investment and partnership opportunities could turn this into a part of the national economic program. It is high time for Nepal to create employment opportunities at home and stop relying on its hard working men and women toiling abroad.