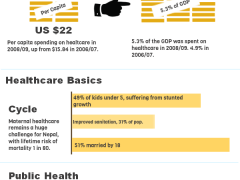 Even in the United Kingdom, where there is a single payer system for healthcare, the cost burden on the government and the long-term financial viability of the national health system (NHS) are big issues. So it should come as no surprise that a developing country like Nepal is struggling both financially and logistically to provide proper healthcare to its citizens.

The infographic above paints the financial picture of the country as well showing the current realities faced by the healthcare sector.

Not only entrenched social and cultural problems, but the lack of infrastructure, the political situation and the state of the economy make healthcare in Nepal a privilege that few can enjoy.

There is a deep divide in terms of access and affordability within the country – a divide that is apparent geographically, socially, economically and in gender based terms. Women, marginalized communities (discriminated because of their caste and profession), the poor and those living in rural areas are the ones who bear the brunt.

Recent political changes have made people more aware of their rights and spread awareness of the discriminatory structure of the state. Unfortunately, the poor state of the economy and government instability are preventing the country from capitalizing on its gains. People are aware of what needs to be done but without proper resources, their hands are tied.

Women too who have long been marginalized are now pushing for better representation and more rights. Events in neighbouring India and locally organized protest movements  seem to be gathering great support for better laws to ensure the safety and rights of victims.

While there are numerous impediments still to clear, the women’s rights movement, more vocal marginalized communities and increasing investment in public health are all signs that the outlook in Nepal is not all gloomy. Also, Nepal’s impressive record in immunizing children against such diseases as polio, together with the low prevalence of HIV and the country’s improving literacy rate offer solid evidence that work is being done – even though most people would like to see a much faster rate of change.