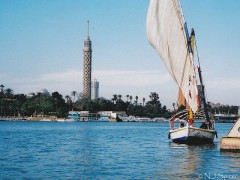 Cairo, Egypt. Uploaded by neiljs on Flickr under a CC BY 2.0 license

Globalization has great benefits and great side effects. When the global economy is doing well, a lot of people try moving to the developed world for a better life while an ailing economy also forces people to find jobs elsewhere. Economic knockdown is perpetuating bad labor practices both in the developed and developing world.

I bet a lot of people have heard of Starbucks cutting paid lunch breaks and sick leave in the UK. It might seem immoral and even illegal for a lot of Europeans, yet it’s more than ‘normal’ in the developing world, and I’ve experienced it at firsthand.

Imagine you’ve lived all your life in the developed world working as a waitress or a clerk with full security at work. Then you graduate from a university with an MA in social sciences and cannot find a job in Europe. So what do you do? Will you stay in Europe and live with your parents or will you try looking for jobs elsewhere? I decided to explore the developing world in Egypt.

A lot of corporations and even small companies own sweat factories in Asia and call centers in India. They benefit from the low levels of law enforcement in the developing world and feel immune as their employees are paid “on the side”, and have no contracts, insurance, vacation or sick leave. This is all perfectly fine until big companies behave the same in the West. After all, those stories don’t get exposed by the major media and don’t attract that much attention unlike the Starbucks’ story.

My previous employer had a perfectly fine office in the UK and a completely messed up call center in Cairo. I wasn’t aware of this until I plunged into this life.

Working without a contract was not only inconvenient, but also a bit alarming for a foreigner like me. I also didn’t have a visa for more than a year. I anxiously imagined the police stopping me on any corner, asking for papers that I didn’t have. Obviously when you don’t have a contract you don’t have any social welfare or any kind of protection. Health insurance? Paid sick leave? Annual bonuses? Forget it!

The absurd company regulations at my workplace docked the pay of anyone who was five minutes late to work. Employees did not have any recreational area and had to sit on the stairs during the lunch break. One of the bosses used to make up random rules regularly once a week. I had to fight for my rights and read up on local labor law. It didn’t not help me much though and I decided to quit.

This all sounds like a job from hell, yet there are much worse jobs than this one. Globalization might seem great from a European perspective, but it does not look so rosy when you’re in a developing world. Multinational corporations are not interested in investing in local professionals; what they are interested in is revenue and cheap labor.  With the deteriorating economic situation, corporations would rather fire one person in the West and hire three employees somewhere in India for the same amount of money.