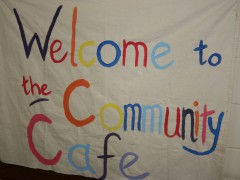 In Brisbane, one group is taking active steps to make things more ‘amicable’ between the diverse groups in this fine city.

Not for research, not for profit and not for any other outcome other than to foster greater understanding and relationships between these communities, the Peace & Conflict Studies Institute of Australia (PaCSIA) has recently been given the opportunity to embark upon what is known as a Community Cafe – where dialogue is the weapon of choice.

I struggled to use the word weapon to explicate the tool utilized in Community Cafe but let’s redefine the word weapon so that it means something peaceful, harmonious and welcoming. An experienced, qualified and friendly facilitator breaks us all up into groups at tables. In front of me sits a woman from Tonga, another from Fiji and also another woman from Fiji and we talked and introduced each other, shared a few stories about ourselves and had a few laughs but then we started focusing on the question at hand.

“What do we know about our neighbours and other communities? Why is that?”

So we started talking – we all pretty much came to the conclusion that we know very little about our neighbours and our community and we wrote a few things down. It all boiled down to one thing though, we barely even know the person living less than 50 metres from us. Then the group swapped, I was host (naturally! I always have to be centre of attention) and so I stayed but watched as new participants joined my table. This time a man of aboriginal background, a young man from China and another man of an English background and a man from India and me, born in El Salvador but raised in Australia.

“What challenges have you faced personally in connecting with others?”

When I think about it, I can completely see how I barely know anyone. Moving into an apartment block recently, where I walk to the door to the apartment block, walk up the stairs, open the apartment door and then lock it as soon as I walk in and get on with my daily life. I reflect and think there are perhaps 10 other (or more) families living here as well and I would probably have seen 2 of them. I see cars, I hear TVs but I see no one.

It’s easy to identify the challenges but what opportunities are there? Hence came the third question.

“How can we overcome the barriers that stand in the way of a well-connected Brisbane community?”

Pretty much everybody could agree that after the floods that happened in Brisbane, we all saw first hand what ‘community’ really meant. The community efforts to help in the recovery and post-flood process was, personally, literally overwhelming. I always thought Australia lacked a sense of community, that western culture was inept at connecting socially and that we all lived in our own private little bubbles. Was I proved wrong. A blogger from Australia, Dominika Ricardi, also discussed this very same issue in her post “Goodwill and Good Governance: cornerstones of flood recovery in Brisbane.” But do we need a natural disaster to push us into reaching out to our neighbours and our community? Do we have to wait for the next cyclone or the next flood before we raise the edges of our lips upwards and form a smile at a passing stranger?

In answering that third question, we tried to come up with concrete ways in which we could build a well-connected community and there was a pretty overwhelming consensus that sharing food or coffee or tea was the best way to connect with your neighbours and your community. Inviting someone over for a tea and having a chat and getting to know each other, it’s inviting, welcoming and there’s no agenda. All assumptions are broken down and you share different cultural delicacies if you want.

The Community Cafe pushed a whole bunch of people from different cultural backgrounds into a space and made us answer pretty broad, if I say so myself, but relevant questions. DESPITE our cultural differences and generational differences, we all just wanted to get along. We wanted to be a ‘Greater We.’

This style of conversation facilitation was safe and it was targeted towards establishing goals that any individual could undertake, as the project goals state, “To assist participants to brainstorm community-based strategies to build better relationships and to build a more inclusive society.”

It’s an interesting activity and the immediate reaction perhaps many of us would say is, ‘I don’t have time to sit around talking…’ but it’s more than just talking.  As the objectives of the community cafe’s by PaCSIA details… “provide a facilitated process for members of Aboriginal and Torres Strait Islander communities, migrant and refugee communities, new and emerging communities, and firmly established communities…to meet in a safe environment to build relationships, learn about and from each other, and to work towards a more cohesive and friendly Brisbane community which acknowledges diversity as strength.”

With this objective in mind, I think to myself, there is something deeper here than just a random chat, it’s a process of discovery, a process of self-reflection and the ability to overcome misconceptions and misunderstandings. This world is facing people movement at a scale never experienced and as we all come into contact with each other, our values and beliefs and assumptions are challenged and before we establish fixed boundaries and exclude others, it is important to understand that to achieve universal goals to deal with the ‘global commons,’ we must understand and include each other.