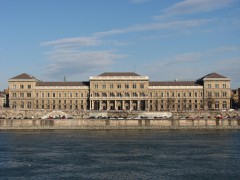 One unintentional yet potentially welcome consequence of the education reform in Hungary is the promotion of public-private partnerships (PPPs).

In primary and secondary education the churches are taking over a lot of schools which hope for better financing through the takeover as was discussed in a previous Local View on Future Challenges. In higher education a similar process is starting: while regulations are constantly changing, universities are also losing a significant amount of money previously received from the state and are now turning to other financial sources in an effort to maintain the quality of education. The Corvinus University of Budapest is a perfect example of such a process.

For the last two years life has not been easy for Corvinus University. The education reform has affected it in various ways. Some of its effects apply equally to all higher education institutions in Hungary. Austerity measures, for example, have meant radical cuts to funding for research and development. But Corvinus has to bear an additional burden: government reorganization plans now threaten to split it up, force its faculties to amalgamate with other universities and dissolve its whole structure.

It is not easy for students either. In Hungary, it is the government which decides how many students can study in each program at each university, both in state-financed and self-financed institutions. (With self-financed universities student can get cheap loans and repay them after graduation.) Yet this year the number of state-financed places has been drastically slashed. It is worth mentioning that there is no government master plan to seek aid from the private sector – in other words, PPPs are not explicitly seen as a part of the solution.

On June 24th its admission figures were made public. The government had previously decided that the overwhelming majority of business education places – which including most of the places provided by Corvinus – will be made available under the self-financed construction. Despite the need to pay for attending Corvinus, this year’s admission figures show that its programs are still extremely popular: with 3,661 freshers it has 7% more students than last year.

Why? One reason is the quality of education on offer. Corvinus is considered to be the best business school in the country and employers value a degree from Corvinus –  so apparently it is worth the cost. Another reason for those who follow the media might be the promises made by the university itself.

As Zsolt Rostoványi, the current rector of the university said in an interview with Eduline last November, prior to the reform around 50% of the university’s income came from the state. Now this proportion is steadily decreasing. Consequently, the task is to strengthen alternative sources of financing. After all, this is what Corvinus is supposed to be good at as it is what is known as a  ‘network university’ with very good connections not only to other universities and research institutes both in Hungary and abroad, but to business life as well. Rostoványi mentioned three key ideas:

There are also plans afoot for student scholarships paid for by companies, possibly in connection with a company internship.

All in all, one can see that creating a PPP is possible even without active government support. A viable public university can help itself in several ways, even if education policy is chaotic or disadvantageous. The case of Corvinus University is a good reminder that the very old concept of the universitas, the independent university as an education and research institution, is still very much alive today.