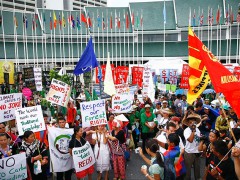 Civil society potentially has the power to force economic policies that change the world; but what if it’s barely keeping itself alive?

Civil Society Organization laws in the Arab world are extremely restrictive, impeding the rights and powers of such organizations. A vibrant civil society arena is typically reflective of a democratic system, and plays a role in achieving justice and promoting development.

In Egypt and the Middle East, the staggering unemployment rate of Egyptians and the diving economy could arguably be salvaged by a strong network of civil society organizations, which through collective action, exercise substantial power to influence government policy. But in the absence of such a strong civil society body or the presence of strict legal barriers that limit NGO activities, is the country’s youth doomed?

I was recently at a riveting intercultural gathering in the stunning Lillehammer, Norway, where a ‘Dialog Seminar’ was held at Nansenskolen or the Nansen Norwegian Humanistic Academy. The seminar, which brought together young dialoguers from across Europe and the Middle East, tackled a few crucial global issues, one of which was economic crisis and policy around the world.

The session started with brainstorming the shared economic difficulties felt by the diverse participants. Interestingly enough, those residing in Egypt and Spain suffered the repercussions of the financial crisis and face similar obstacles, including the shortage of adequate jobs, suffering of local businesses, and more.

The seminar’s speaker on that day was Fredrik Glad Gjernes, an activist devoted to poverty eradication and economical injustice. Dressed in jeans and a sweatshirt, Gjernes radiated passion and hope. And he was about to reveal the key to creating economic policies to change the world.

Gjernes described that there were two superpowers controlling today’s economic dynamics; namely governments and multinational corporations, adding that there was a third superpower with the potential to force justice and transcend the stronghold of the former superpowers.

I was at the edge of my seat. All ears, I waited impatiently, with Egypt on my mind, for him to reveal that mystery superpower, thinking it could be the answer for us.

“Civil society,” he said, was the answer. Uniting over common goals, and moving towards collective action driven by the principles of human dignity could be immensely powerful to influence and drive economic policies to change the world.

I could not hide my disappointment. It was as if someone had given me a gift box with no gift on the inside.

For there is no dearth of legal, political, financial, and cultural obstacles facing the civil society scene in Egypt and the Arab world at large. Does this mean, there is no hope for transforming economic policies to alleviate poverty, unemployment, and other financial difficulties plaguing the lives of many Arabs and in effect, standing in the way of development, democracy, and change?

I do not claim that our civil society is non-existent. On the contrary; there are 16,000 registered NGOs in Egypt. Despite the highly restrictive nature of its civil society laws, Egypt has one of the largest and most vibrant civil society sectors in the entire developing world. This shows the sheer potential of the NGOs, who would play a much more crucial role if allowed the space to flourish.

Yet in recent years, they have been governed by one of the most restraining laws worldwide; enforcing barriers to registration, limiting foreign funding, restraining the scope of activities, unexplained legal dissolution, and imposing harsh penalties sometimes in the form of jail.

A vibrant civil society scene is needed in Egypt’s transforming democratic landscape. As a third superpower, civil society is meant to act as a buffer zone between the government, the market and the public. But under autocratic public policy designs present in the Arab world, the government hinders the scope of activities of this buffer zone, to preserve dominance and power, effectively locking out citizens from participation and representation in public policy debates including economic policy.

According to Article 19, an organization working worldwide to promote freedom of expression, development and human rights organizations in Egypt have a key role in the democratic transition. Indeed, a dynamic and diverse civil society holds a major role in any developing country and young democracies; therefore infringements on NGOs and CSOs threaten such a role.

At the seminar in Lillehammer, activist Fredrik Glad Gjernes said something along the lines of “Unite over common goals, and leave the rest to chance.” Following the series of uprisings that took place in the Arab World, first in Tunisia, then Egypt, Libya, Syria and others, we are witnessing civil society uniting over shared goals. If this is accompanied by legal reform to lessen the restrictive nature of civil society laws, then maybe, the third superpower could influence economic policy in the Arab world too.