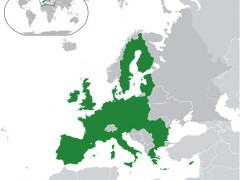 No state in today’s world can escape globalization. The socialist policies adopted by former Egyptian president Nasser in the 1960s might have been suitable for his time. However, the present international system requires the removal of all trade barriers between states.

In Egypt, some intellectuals are criticizing Egypt for taking the route of economic liberalization, ignoring that  such route granted Egyptian products free access to the world’s largest unified market; the European Union. The most important agreement handling the liberalization of Egypt’s economic and trade relations is the Egyptian-European Association agreement (AA).

The AA is predominantly an economic agreement whose main aim is the establishment of  a free trade area with Egypt. Under the AA, Egypt was granted two key privileges:

In return, Egypt grants the EU:

In assessing the importance of the AA, it is crucial to mention that the AA granted all Egyptian industrial and most Egyptian agricultural products free entry to the world’s largest market, serving more than 500 million Europeans within the unified boundaries of the EU 27 member states.

On the other hand, Egypt still benefits from the custom duties imposed on various European industrial and agricultural products entering its market. Those duties constitute a source of revenue for the Egyptian government whilst also providing protection for Egyptian industrial and agricultural products. Additionally, the AA granted Egypt the right to extend the scheduled waiver of customs on European products entering its market for four years, if it perceived imported products to be posing a threat to Egyptian agricultural or industrial products.

In fact, the realization that all European industrial products (including cars) will enter Egypt free of customs in 2019 is a great incentive for Egyptians to improve their own efficiency and produce products of greater quality – which is what competition is all about.

The AA also provides Egypt with technical assistance that will help it to improve its production cycles and get rid of administrative barriers that impede the success of many small and medium-sized projects. In my opinion, technical assistance is no less important than financial assistance as it enhances our capabilities and allows us to create products that are able to compete with Chinese and European ones on the international stage.

The quotas imposed by the EU on some Egyptian agricultural products can indeed be perceived as one of the drawbacks of the AA, at least from the Egyptian viewpoint. However, such a drawback is not as serious as it might seem at first sight when we remember that Egypt is not exporting enough products to fill those quotas. This takes us to our undeniable conclusion:

Finally, I believe taking part at similar agreements to the AA would significantly enhance Egypt’s prospects of becoming a truly developed state in economic and industrial terms, decreasing the huge load of government expenditures that are not able to provide Egyptians with efficient services.