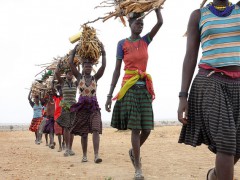 As Uganda’s climate continues to change at an unprecedented rate, it is important that Ugandans learn to adapt and fight climate change. The changes in climate and extreme-weather vagaries like the recent floods in Kasese and the landslides in Eastern Uganda are already putting human livelihood, including water resources, food security, and health at risk. This poses a great challenge to human life, ecosystems, people’s livelihoods, and the development of Uganda’s economy. Therefore, measures to adapt to climate change must be implemented.

There is no doubt that Uganda is one of the countries that is greatly vulnerable to the effects of climate change, as seen in climate variability, including increasing temperatures, increased frequency and intensity of rainfall, heat waves, droughts, floods, and storms. Between May and August of this year, there was a severe drought in most parts of Uganda. The drought caused scarcity of food, animal feeds, and an increase in food prices.

Adaptation to weather and climate effects in Uganda is still largely rudimentary. The severe drought has pushed farmers to search for drought-resistant crops and varieties like sorghum and cassava. Some brave cattle keepers have had to move in search of pasture and water. In some settled cattle-keeping communities, the government has constructed water dams to provide water for animals. Small-scale irrigation schemes are being encouraged to supply crops with water in times of severe drought.

While crops fail, young able-bodied men are running away from crop farming to ride motorcycle taxis (popularly known here as bodaboda). Some people have opened up small kiosks, selling petty goods like paper bags to earn a living in response to extreme weather conditions like droughts and floods. By resorting to bodaboda riding, the young people are adapting to climate change. But, this may prove futile in the long run because sustainability is not guaranteed. Besides, in the urban areas, bodaboda riders are low-income earners who exert more pressure on the environment. They live in low-cost houses that are usually found in wetlands.

Some people have resorted to mixed farming. They keep a few animals, like cows for milk, and grow crops to safeguard against climate and weather shocks. They believe that if crops fail this season, the farmer will find solace in livestock. Some farmers are being encouraged to plant improved varieties that are drought resistant and high yielding. In worst case scenarios, the farmers who are hit by extreme weather events have taken to charcoal burning to get money to buy basic household items.

Others have migrated from rural areas where agriculture is heavily practiced to urban centers to carry out petty jobs. But this may not be sustainable enough as these urban migrants are often poor and end up exerting even more pressure on fragile ecosystems. Also, the use of energy-saving stoves is being encouraged to reduce the rate of tree cutting for bio-fuel. Some are resorting to agro-forestry, planting tree crops like mangoes and oranges, which assists in the formation of rainfall and provides fruits for income and nutrition.

Another significant number of Ugandans are planting trees for commercial purposes. The trees help in modifying weather and absorb carbon emissions. Some NGOs have made it a point to promote the planting of trees as a way of mitigating and adapting to climate change. These trees are for woodlots that, when mature, can be used for firewood, timber — and money. But the bottom line of the tree planting is protecting the environment and mitigating the impact of climate change by absorbing carbon emissions.

The struggle to adapt to climate change is not only a matter of individual efforts but also involves government. In 2007, Uganda responded to the emerging impacts of climate change by developing the National Adaptation Programmes of Action (NAPA). The adaptation measures are being coordinated by the Ministry of Water and Environment.

With the help of development partners, the government of Uganda has established a climate change adaptation center in the semi-arid Karamoja sub-region to train communities in the fight against climate change. For Uganda to escape the impending climate catastrophe, adaptation measures such as these, as well as others, should be encouraged.