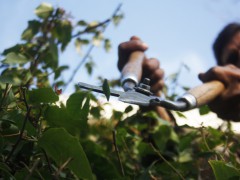 “Mother Earth?” laughs Fida Hussain scornfully. “What does that mean?”

Fida Hussain is a forty-something taxi driver in Pakistan’s beautiful capital, Islamabad. He lives in one of the shanty towns (Kacchi Abaadi as it is usually called in local lingo) surrounding the city of bureaucrats and elite businesspeople.

Fida Hussain hails from Sialkot, a city well-known for the sporting goods it manufactures and supplies. He can be found waiting around the Islamabad markets, hoping to get hired by someone.

At night, he works as a private security guard. Hussain can read the Urdu newspapers but he doesn’t.

“What do I have to do with a newspaper?” he asks. “The antics of the government and political parties isn’t going to feed my children or clothe them.”

Does he know the earth is in great danger from our own activities?

“You educated people are mad. You just create these stories to make our lives more difficult and so you have something to do because you  have so much free time.”

Well, so much for facts.

“Allah created the world for us to use and He will take care of it. Why should we worry? I don’t do anything to destroy it anyway.”

You throw trash on open land, use plastic shopping bags and cause pollution with that carbon emitting taxi, I tell him.

He throws up his hands in exasperation, “You just want us to stop living altogether!” he exclaims.

“Why are you heaping all your troubles on my head? I’m not the one who created the cars or the plastic shopping bags. It was just another educated person like you who did it. Why did he create something that was harmful in the first place? Didn’t education teach him the difference between good and bad?”

We didn’t know the effects these things could have on the environment, I explain. We only realized it later and are now taking steps to rectify our mistakes.

“Well then,” Fida Hussain smiles. “You created the problem, so you deal with it. I have enough to worry me as it is.”

Just like the masses of Pakistan bear the brunt for problems created by the rich, so too is the case with third world countries and their response to calls for social responsibility is almost similar to Fida Hussain’s.

The first world is primarily responsible for the environmental disasters besetting the world while the third world lives in both damned responsibility and blissful ignorance.

Jonathan Patz, a professor at UW-Madison’s Gaylord Nelson Institute for Environmental Studies in a research conducted by the WHO says, “Those least able to cope and least responsible for the greenhouse gases that cause global warming are most affected”.

The United States has one of the biggest carbon footprints in the world and accounts for almost 24% of the world’s CO2 emissions. One would expect that the country responsible for such large scale environmental destruction would be among the first to do something to address the issue. However, surprisingly, the United States is the only country that has not ratified the Kyoto Protocol.

“The Kyoto Protocol is a protocol to the United Nations Framework Convention on Climate Change (UNFCCC or FCCC), aimed at fighting global warming. The UNFCCC is an international environmental treaty with the goal of achieving the stabilisation of greenhouse gas concentrations in the atmosphere at a level that would prevent dangerous anthropogenic interference with the climate system.

“Under the Protocol, signatory countries commit themselves to a reduction of four greenhouse gases (GHG) (carbon dioxide, methane, nitrous oxide, sulphur hexafluoride) and two groups of gases (hydrofluorocarbons and perfluorocarbons) produced by them, and all member countries give general commitments.”

The President at the time, George Bush, refused to ratify Kyoto saying, “Kyoto would have wrecked our economy. I couldn’t in good faith have signed Kyoto.”

The WHO puts this rather well as:

“Those populations that have contributed least to past emissions of greenhouse gases are most vulnerable to the impacts of climate change, including on population health. The governments of developing countries are therefore reluctant to commit to limits on greenhouse gas emissions to help solve a problem that has, so far, been created elsewhere.

For their part, the governments of richer countries generally acknowledge their responsibility to take a lead in combating climate change, but hesitate in implementing policies that they consider may harm short-term economic growth and hamper their competitiveness against rapidly developing economies.”

The average third world citizen is neither responsible nor aware of the environmental problems facing the world today. And while this is a shared responsibility, the bulk of it should still lie with those who have created the problem not those who are actively living with its consequences.