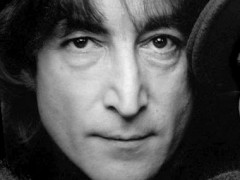 “Imagine there’s no countries, it isn’t hard to do, nothing to kill or die for, and no religion too, imagine all the people living life in peace. Imagine no possessions, I wonder if you can, no need for greed or hunger, a brotherhood of man, imagine all the people sharing all the world”. This is what John Lennon encouraged us to do: imagine a world in which peace is possible so we can eventually bring it to reality. Years after his death and the thousands of times we’ve sung the song, not much has changed: countries still exist, there still seems plenty to kill for, but not necessarily to die for, and religion still overpowers, no doubt about it. As for life lived in peace … just imagine….

I had a friend who was abused by her boyfriend. He’d insult her and beat her. Eventually she got rid of him, but the next boyfriend she found would be the same. It was like she was stuck in a pattern where destructive choices followed her like a faithful dog. On a larger scale, the world looks pretty much the same: a turning wheel that never learns the lessons of experience. So peace looks like a far away kingdom, one that has never been reached because nobody knows how to reach it. Instead, we go on repeating the same old mistakes: the fight for possessions, power, being right, being on top of it all.

The world is a mirror that reflects our behavior. And we paint a sorry picture if we come to think of two key aspects: the number of peace organizations and the number of ongoing conflicts in the world. There is a social movement called the “peace movement” and it seeks to achieve ideals such as ending a war or minimizing inter-human violence in a particular place. There are many peace movements, all kinds of movements: environmental, anti sexist, anti racist and so on. Wikipedia counts 269 such organizations worldwide, but I am pretty sure there are many more if we were to include groups for prayers and meditation whose mission is to obtain peace by the power of all the good energies sent into the universe.

As for ongoing conflicts, warsintheworld.com say that 59 countries are involved in wars as we speak and 362 militias-guerrillas and separatist groups are taking part in the “fun”. The conflicts are divided up as follows:

The Uppsala Conflict Data Program, recognized by the United Nations, say that in 2011, the number of armed conflicts in the world increased, with the strongest increase taking place in Sub-Saharan Africa. 71 percent of people killed in 2011 were civilians. More than 18,000 of the civilian casualties were reported in populated areas, says a report by the non-profit group Action on Armed Violence.

“You may say I’m a dreamer …” Good for you, Lennon, but this didn’t get you far! As peaceful and harmless as he was, he was shot by a stalker on the 8th of December, 1980.