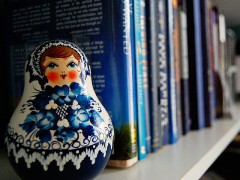 ‘Where are you from?’ is the first question everyone asks you. It’s a question I can’t stand. Explaining my origins and identity takes a long time. Why? Well, I was born in Vladivostok, a small city in the far east of Russia. I’ve lived in Tel Aviv, Budapest, Cairo and am now living in Bangkok. So it’s hard for me to say that I belong to any one particular country or place. A week ago I was having shisha in Cairo, right now I’m sitting in some street café in Thailand.

‘So where did you say you were from?’ Many people still see you through the lens of your country of birth and your passport. What does your passport have to do with you? It’s hard to explain that living in different places turns you into a different person.

I keep on playing mind games in all the countries I visit. Today I told a waiter that I’m from Kenya. He couldn’t hide the surprised look on his face, as I don’t really look African. But the way you look no longer matters, as you can be from any country in the world.

Traveling and exploring brings colors to my life. As a writer I get exposed to different cultures and habits. I start seeing things from different angles. Moving from one country to another is essential for many young professionals living in this vibrant world. If you want to get a job in a big company you need to have some international experience and speak several foreign languages.

Modern young people are like a shoal of fish: they are very flexible and dynamic. They move to places where they can find jobs and a favorable political climate. High unemployment rates force them to seek jobs elsewhere. Location is no longer a defining factor. Places like Singapore and Dubai have some of the brightest expat communities for a very good reason. Large multinational companies are ready to invest their time and money in smart employees from different countries. This trend will only be reinforced with time.

Some economies have already built their strength on foreign educated professionals. They are willing to invest in sustainable business solutions and develop favorable taxation system to encourage the young entrepreneurial spirit. After all, people are the driving force of economic growth and innovation.

A different approach to downshifting?

There is no doubt that globalization affects people’s identities. It is not a bad thing as travelling only broadens people’s minds and makes them learn and accept other cultures. There is no need to abandon your own culture and adopt something foreign. Yet there is always a threat that educated young people will never come back to their motherland.

I realize that I don’t want to go back to Russia. I don’t see myself retiring or having a family there. This modern approach to migration is a political statement for many educated young people who want to have nothing in common with the current regime and will try their level best to get out.

A famous LiveJournal community It’s Time to Leave [ru] provides a space for netizens to share their stories on migration and ask for help. The community claims [ru] that at least 11 million Russians have already moved abroad.

The deteriorating economic situation was a determining factor for migration in the past. Right now many people are leaving because they feel suffocated in their own country. It is not downshifting, it’s social exile. Rocketing bureaucracy and low levels of law enforcement make people anxious about their future. Having long-term plans is a bit useless in Russia, as you never know what might happen tomorrow. The sense of hopelessness is stronger among people who are well off. Living standards have improved over the years, but at what cost? A lot of people feel that they are deprived of some basic political and social rights and would rather abandon their well paid jobs in Moscow and start afresh somewhere else. Social and political freedoms are equally, if not more important, than a thriving economy. If the current regime does not change its course, there will be soon no one left to upgrade the country’s archaic political system.