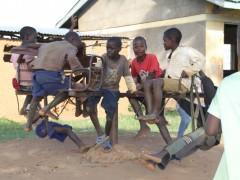 Inequality is a social challenge that exists in every society. There is always inequality among the poor and among the rich. Even in same family if the children are born of rich parents, the children don’t usually inherit the same amount of wealth. Just like there are inter-country inequalities, there are those considered paupers among the poor and others who are considered fairly doing well.

Even if Uganda is considered a poor country, there are visible inequalities in access to education, access to health care, settlement, etc between Ugandans living on mainland and islands. On mainland Uganda, children of the minority middle class and rich Ugandans get good education in upmarket schools where tuition is $500 minimum per term (3months of school education). On the other hand children of the poor are stuck in free education provided by government whose teachers are ever striking over low pay of $100 per month. Children living on islands sometimes have no schools to go to. They suffer neglect.

On April 24, I boarded a boat from outskirts of Jinja town in Eastern Uganda to Kisima Island in Lake Victoria. The lake is the second largest fresh water body in the world. Conditions in Lake Victoria’s islands are dire. The local leader at Kisima Island told me there are over 2000 people who live there. Hygiene and sanitation conditions on the island are poor as opposed to what we see on mainland Uganda.

Ugandan children who live in Kisima island playing. Such children have limited access to good education. PHOTO BY Mubatsi

Communities in these islands are poorer than their counterparts living on the mainland. Provision of social services to the islands is largely absent. Accessing the island itself is a nightmare. First, the cheapest means of transport connecting to islands is water. But, because the communities are poor, many of them cannot afford about $2 to spend on transport to a better hospital many of the island community members are dying of curable diseases.

As regards to settlement, the housing on islands is that of extremely poor people. They live in timber made shacks while others have mud and wattle houses.

There is urgent need for inclusive and equitable service provision to all Ugandans whether they live in remote and hard-to-reach areas like island and mountains or not.