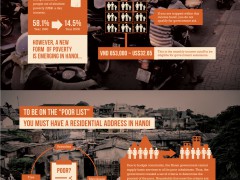 The latest infographic from the Asian Trends Monitoring team tells a story about Hanoi, capital of Vietnam, and how it fares in its struggle to provide basic services for its people. The numbers and information in the infographic are a combination of secondary data from the World Bank, primary data from the ATM poverty profile survey, as well as information from interviews the team conducted in the field in September 2012.

This infographic highlights the emerging issues that Hanoi’s poor must contend with. Although Vietnam’s GDP is growing and income levels among the poor are rising, it does not necessarily translate into improved access to services. There are several limitations to the government’s service provision capacity, which leads to things like a strict “poor list” of eligible households.

The services available to Hanoi’s poor are extremely limited and often inaccessible to those most in need. Migrants and seasonal workers, often among the city’s poorest residents, are by default not eligible for the poor list because they are not official Hanoi residents. Furthermore, they are unable to access decent housing and financial services.

As most of Hanoi’s poor are self-employed in the informal sector, they often require loans for working capital and consumption smoothing. Unfortunately, microfinance services in urban areas are rarely available. The survey data confirms the lack of choice when Hanoi’s poor are in need of credit. The overwhelming majority of respondents, 73.9%, take private loans from relatives or friends. Even the services of informal money lenders, often the next most popular alternative when the formal financial system is inaccessible (compare with ATM Bulletin 17 “Manila’s Poor”), are only used by 7.8%.

The poor are also deprived when it comes to health services. If they are unable to afford health insurance at market rates, they are forced to pay out-of-pocket for every treatment. An ongoing commercialization of health services has further worsened the gap between the affluent and the poor. The UNDP Human Development Report notes that attempts to ensure sustainability of social service funding have led “to the increasing commercialization of public social services, and over-reliance on user fees by service delivery organisations”. More than 50% of respondents have difficulties in paying for health treatments. As a result, many choose to self-medicate or leave their ailments untreated. Moreover, a third (36%) of those who make use of locally available clinics are dissatisfied with the service quality.

If you want to read more about poverty alleviation efforts in Hanoi, download the “Asian Trends Monitoring Bulletin 18: Empowering Hanoi’s Poor”. In it, the ATM team discusses the different strategies for poverty alleviation that would be more effective in improving the lives of the poor without putting additional strain on the government budgets. The Bulletin also includes a foresight analysis on the alternative futures of Hanoi, in order to help the people and planners in Hanoi decide what path they would like to take.