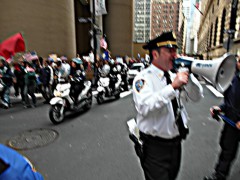 This is about our personal experience down at Liberty Park.

The police used the ‘stay-on-the-side walk rule’ during the march to the Chase Bank to very aggressively harass people – us – by screaming and pushing us physically towards the sidewalk, even if we just had one foot on the street. This unnecessary intimidation- and provocation tactic was applied to escalate a climate of hostility and resentment.

The same is true for the barricades around Liberty Square and the mobile watchtower erected on its south-west corner: it feels like provocation and intimidation.

The protesters are NOT inmates or criminals, but citizens executing their right to demonstrate, and, by the way, fighting also for the cause of all the police officers there. They represent definitely – just like us – the 99%.

The city should instead – as it happened in Los Angeles – put some portable restrooms and showers on the street and help keep the neighborhood clean. Mayor Bloomberg should show some support for the demonstrators instead of him and and the bankers belittling and harassing them and having the taxpayer pay for the over-representation and overtime of the police forces.