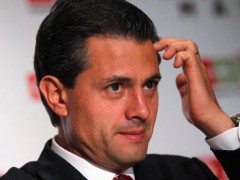 2013 was meant to be Mexico’s year to prove it could get back in the game, and become a more dominant economic power. President Enrique Peña Nieto attracted the world media spotlight after taking office, pushing his party’s (PRI) modern face and pursuing a series of aggressive reforms. Caught in the euphoria, for a moment we forgot about accusations of electoral fraud, the winning candidate’s media mishaps, and the PRI’s alleged corruption and repression. It was no longer how PRI bought its way into government, but about positive ‘transition of political power’. Talk about ‘the day democracy lost out’ to Peña’s party, didn’t seem that any more as Mexico was buoyed up and optimistic about its economic growth for 2013.

Today, the headlines in Mexico spell out the message of unfulfilled expectations. 2013 for Mexico has meant economic stagnation, botched security policy changes, unemployment, disappointing reforms, and human rights organizations’ criticism of the impunity which crime in the country enjoys. However, 2013 also put the political and apolitical movements which appeared during presidential elections to the test.

According to the Economist Intelligence Unit’s measure of democracy, there has been a decline in democracy across the world since 2008. The EIU believes that democracy is now in retreat, after the ‘decades-long global trend in democratisation’, as the global financial crisis has exacerbated negative trends in political development and media freedoms are being eroded in Latin America. Its report argues that many governments are feeling increasingly vulnerable and are reacting by intensifying their efforts to control the media and impede free expression. This has certainly been the case for Mexico where journalists in fear of their lives resort to self censorship. Media censorship and other cases of corruption in Mexico have moved young people to take action and organize in social movements.

Social movements like the ones generated during Mexico’s presidential elections can be seen as acting as a ‘democratic counterweight’ whose purpose is to urge institutions to respond to society’s demands. For example, the student #YoSoy132 movement by scrutinizing and critically reviewing the doings of public office has incentivized broader political participation among young Mexicans.

Presidential candidates in 2012 included Enrique Peña Nieto, PRI’s popular contender, and Andrés Manuel López Obrador (PRD), the second time left party’s presidential candidate. Two social movements came to the forefront of public attention in the run-up to the elections and have continued to be influential throughout 2013. Despite extensive criticism, these social movements have demonstrated their ability to organize, discuss, and motivate civil society to join in discussions of current political matters and pursue solutions through the political system.

In 2006, the PAN candidate, Felipe Calderón, won the presidential elections by a less than 1% margin against the left PRD candidate, Andrés Manuel López Obrador (AMLO). With a reputation as a firebrand, AMLO denounced the elections as fraudulent and declared himself to be the legitimate president, calling for resistance against the new government. Six years later, AMLO reinvented his political persona and reached out to the people of Mexico presenting himself a citizen truly concerned about fair and equitable development in the country.  More importantly, he also reached out to other politicians and parties as well as to the private sector. He then launched a political movement called, Morena, the National Regeneration Movement officially described as a social leftist political movement in Mexico in the process of becoming a political party. Known also as a civic association, it invites political efforts from all groups of citizens subscribing to a leftist political agenda. Morena has since organized events inviting citizens to discuss the current reforms now being passed through the Senate. It has two affiliated student organisms which invite more young Mexicans to join them.

The student movement #YoSoy132, was also born during the 2012 presidential elections. It is a citizen movement made up of Mexican students from top-rated public and private academic institutions. Its initial objectives were democratization of the media and the creation of a third national debate between presidential candidates. The movement later rejected presidential candidate Enrique Peña Nieto’s tactics of manipulating mass media which gave him a great deal more time for his  campaign ads than all the other candidates.

#YoSoy132 was born after a protest against Peña when he visited Ibero University, when students blocked his exit due to the then governor of the State of Mexico’s tactic in 2006 at San Salvador Atenco to break up a protest by local residents by calling in state police, causing the death of two protesters, while human rights groups condemned the police for numerous violations during those riots. The candidate defended his decision to use force, enraging students, calling the candidate a ‘murderer’. After public servants and media discredited these students, declaring they weren’t even students from the university, 131 students uploaded videos with their student IDs declaring their apolitical intentions and discomfort to this media manipulation. #YoSoy132 movement declares being apolitical and inclusive of all citizens who wish to articulate demands through the movement’s university committees.

Both movements have demonstrated that they’re experiencing, along with Peña’s new government, a learning curve. #YoSoy132 has been criticized for not being able to commit all of its members to a single objective. Morena, after AMLO suffered his second presidential defeat, is consolidating into a new party and has furthermore been criticized as an opportunist tactic from AMLO. One of Morena’s latest most criticized tactics has been building a fence around Senate as a protest to the energy reform being passed.

Both movements have essentially been composed of Mexican young people who are have become politically active for the first time, but an extensive survey done by Colegio de México, a Mexican public education and social sciences and humanities investigation institute, provide more insight on who is participating in these social movements. The institution surveyed 3,250 young residents of urban areas from 76 cities and metropolitan areas from 18-29 years old.

After stating the difficulty of defining a young political culture in Mexico due to gender, ethnic, social, economic, etc conditions, the institution proceeded to conclude that young people are not significantly interested in local, estate, or national issues. Less than 10% of young people participate in organizations, associations, or groups, and young trend demonstrates that Mexico’s youth is inclined to leftist ideologies, especially towards the State’s role in its economy, PEMEX (oil) and its privatization. Two thirds of the surveyed young people consider that the government does not have any concern for their needs and half of them declared that the main problem is unemployment.  The surveyed young people also mentioned that the most common way of action is gathering signatures rather than ask for intermediation to a politician.  Although significant political and apolitical social movements were born and made history, young Mexican political participation is relatively low overall.

‘A culture of passivity and apathy, an obedient and docile citizenry, are not consistent with democracy’, but Mexico’s recap for 2013 has demonstrated that arbitrary detentions and scandalous impunity is still in its agenda, discouraging its population to further trust our government. Although social movements have proven to reach young Mexicans, there is still a long way to go, where political will, coordinated actions, adequate resources and an effective dialogue with civil society is required in order to put in practice a healthy democracy.