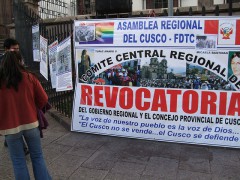 Although the history of democracy in Latin America began in the first decades of the nineteenth century, two hundred years later we still keep talking about “young” and even “precarious” democracies when referring to the different countries of the region. And democracy in Latin America certainly has been a series of revolutions, caudillos (leaders), coups, dictatorships, “kindly” dictatorships and foreign power interventionism, but it is also a story of exclusion and social inequality and how democracy has little by little has become a popular and inclusive business rather than an elite one.

In the Peruvian case for example, the first polls were held in 1809 to elect the Cádiz Court representatives. The Court stated that a modicum of income was necessary to vote, so the first voters were members of the Creole elite from the cities of the Peru Viceroyalty. The same restriction was maintained in the constituent or presidential elections during the early years of independence (finally reached in 1821). The first “popular” presidential elections took place in 1850 under indirect suffrage.

However, we should recall that the country’s constituency was pretty limited. For example, in the 1872 elections only 3,778 voters took part, while the number of people over the age of twenty was estimated to be one million. Neither women nor illiterate people voted (a remarkable 85 per cent in a country with a huge number of indigenous people with no access to education) and slavery had only recently stopped being legal. But this constituency was slowly broadened, for example, when women won the right to vote in 1955. The broadening continued when illiterate people got the right to vote, and finally when active duty police and military were allowed to vote in 2005.

Another democratic development occurred when it was established that mayors and local authorities would be elected by popular vote, something that has not always been the case in Peru and other Latin American countries. But there are other forms of democratic involvement apart from the representative democracy we exercise when we choose representatives, including so-called direct democracy, exercised through referendums and revocations.

In the case of revocation, this mechanism has existed in Peru since 1994 and has been used eight times already, with nearly 300 mayors being revoked in different districts of the country in this way. Nonetheless, and this is the crux of the matter, just when a revocation process has recently been proposed in Lima, suddenly critical voices have been raised asking how it is possible to allow the existence of this tool that weakens democracy. This is similar to what happened with terrorism, where it was not until Lima suffered several attacks that most people became aware of it and the need to confront it.

But, can a rightfully democratic process become undemocratic? Or is it just a matter of improving existing legislation to stop abuse of the process? Political expert Steve Levitsky outlines certain basic (and tacit) rules on the behavior of electoral winners and losers whose infringement might trigger a conflict that could result in a constitutional break down. Ecuador, Bolivia and Venezuela are some of the examples quoted by Levitsky.

Meanwhile, the sociologist Fernando Tuesta highlights that, beyond the civic right to revocation, its use is heavily promoted by defeated candidates who, either in local or regional polls, try to revoke the whole council so that new elections must be held and they can try their luck again, in other words, it’s a sort of political revenge.

For the analyst Fernando Romero, what are remarkable are the methods used by those who promote revocation in order to reach the required number of signatures needed, methods which have been opaque, ranging from buying signatures to false accusations, or have even exaggerated the mistakes made by the authorities. In brief, things that actually apply to almost any electoral campaign and not only in Peru.

The same intentions made clear during this Lima revocation campaign could be underlying the initiative to revoke Bogota’s mayor Gustavo Petro, as well as the initiative to include revocation of Parliament in the Colombian constitution. Additionally, to complete the Latin American outlook regarding recall processes: Bolivia finds itself involved in the process of collecting signatures to revoke local authorities; while in Argentina we find something similar regarding the Mayor of Bariloche (even though electoral laws in Argentina do not take revocation into account, some local constitutions do). Meanwhile in Ecuador recall processes have been brought to a halt since 2011, and in Chile it is not even considered.

The knowledgeable Alan García Campos gathers arguments pro and contra revocation proccesses. With regard to the reasons for, he mentions, among other reasons, that they generate an attentive citizenship, encourage responsibility, work as a pressure-release valve, stand for an alternative to more difficult procedures and strengthen the repesentative system. Concerning the reasons against, he points out that revocation is against the republican idea of government, it is disruptive, polarizing and highly divisive, it may have counterproductive consequences, it may be used for undesirable purposes and it is a costly voting procedure.

Thus, we see that while this democratic tool has become very popular within the region, its use is more and more controversial, somehow demonstrating the complex relationship between the state and its citizens. Should mass citizen participation be restricted or further promoted? Is the popular mandate always the most accurate? To what extent should rulers be subject to the will of the people? These are questions that show that democracy in Latin America, more than being young or precarious, is fighting to forge its own path ahead and is raising questions unknown in other places as it does so.

Translated from the Spanish by Esther Ortiz and proofread by Kitty Garden.