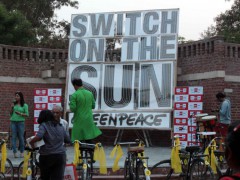 A conundrum of modern times, the debate on growth versus sustainability is like the age-old question of the chicken and the egg — which came first? Or in this case it is a question of priorities. Should we prioritise growth over sustainability or vice versa? Or why can’t be have both and lift people out of poverty, ensure them two square meals a day, give them a roof over their heads and also protect Mother Nature at one and the same time?

The north India state of Uttarakhand nestling in the soutern slopes of the Himalayas, saw a gargantuan tragedy unfold on June 16 when a violent cloud burst led to devastating flash floods and mudslides, catching local people and pilgrims unawares. Over ten thousand people lost their lives and literally every temple, house, bridge and road was flattened by the raging rivers and tumbling mountains. Noted environmentalist and Gandhian, Sunderlal Bahuguna, the initiator of the world-famous chipko movement, says that the tragedy is man-made as big money has been coming into the state and playing havoc with the fragile Himalayan ecology.

In short, the horror that Bahuguna witnessed has kindled the growth versus sustainability debate. The natural disaster that shook the Indian state is a clear example of how unplanned, myopic and profit-driven growth can lead to an environmental catastrophe. It is not just Bahuguna: most people agree that the rampant exploitation of Himalayan rivers by building hydro-electric dams has been a destabilising factor in the region.

Running to stay on the same spot

Let’s turn to another example. A recent report by the World Bank says that the internationally feted Indian Growth Story has come at a great cost to the environment. In a very surprising report entitled, ‘Diagnostic Assessment of Select Environmental Challenges in India’, the World Bank  – which after all is a strong advocate of economic growth – says that environmental degradation costs India $80 billion per year or 5.7% of its economy. So, in many ways growth is like a thick veil camouflaging a severely depleted landscape.

Most importantly, in simple terms what the World Bank report is saying is that the gains of growth have been eliminated by the environmental degradation it causes. In short, India seems to be playing a zero sum game – you make economic progress but lose almost an equal amount in terms of natural resources. Yet it can also be interpreted in another ominous way – that while the rich enjoy the benefits of growth, the poor are left to suffer the consequences of a depleted devastated environment.

To a large extent one can safely say that the examples mentioned above, which are just weeks old, both point in the same direction – that it is not easy to yolk together growth and sustainability. These two cases from India show that the reckless pursuit of growth leaves a trail of devastation behind which is impacting severely on the subcontinent’s ecosystems.

Some hard core data by the National Sample Survey Office (NSSO), an agency that carries out surveys and collects data on socio-economic, demographic, agricultural and industrial matters for the Government of India, offers yet another recent case in point. Data related to consumption expenditure, released just a few days back, shows that income disparity is growing at a rapid pace. It also shows that the richest 10 per cent of people in Indian society have seen the highest rise in their incomes while the poorest 10 per cent have seen the slowest increase in their earnings. The remaining 80 per cent of the population has seen the usual levels of growth – between 35-40 per cent for rural Indians and 40-50 per cent for urban dwellers.

India’s growth rate has been ‘spectacular’ and second only to that of China for more than a decade. Yes, the economy is growing but not for all the people and neither is the environment benefitting. Growth seems to be happening at the expense of jobs, people, the environment and a secure future. Add to this the nightmarish thought that the country could overtake China in having to provide for the world’s biggest population, not in some distant future but within our own lifetime. And if all those hundreds of teeming millions aspire for a European – or even worse, an American – standard of living, what will happen to the environment?

Sustainable development, as we now understand it, is about both – providing for the people as well as the environment. Nothing summarizes this better than Gandhi’s wise remark: “Nature has enough for man’s need for not for his greed.” This is now truely the time to ponder and act on it!