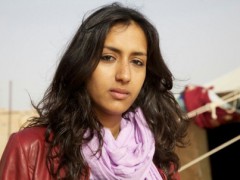 Migrants who come back home can return with valuable new skills and contacts that can positively affect their home countries’ job market. But matters of identity, questions of belonging and shame at returning empty-handed can overwhelm purely economic concerns. This year’s Berlin Film Festival showed two films dealing with characters stuck between two worlds, trying to find “home”.

When Fatima came back, her family expected her, even more than she thought. After living 16 years abroad in Spain, she was for the first time since childhood in the Algerian desert, to bury her mother. What was meant to be a short stay stretched longer.

To the contrary, when Satché came back, nobody expected him. He left Senegal to study in the U.S., where he didn’t achieve and came back with no degree. Now, some acquaintances disrespect him for this choice. One year later he comes to know dreadful news about his future.

Fatima (Nadhira Mohamed) and Satché (Saul Williams) are the main characters respectively of two films with European and African ties, Wilaya by Spanish director Pedro Pérez Rosado and Aujourd’hui (Today) by French-Senegalese director Alain Gomis. Both films handle in different ways of the feelings of people whose destiny has pushed them to cross continents for a better life but who incidentally returned voluntarily.

In Wilaya, Fatima left very young the Algerian refuge camp of Sahrawi people, where she was born. But has this place ever been home ? Her parents arrived there at the end of the 70s as Western Sahara was abandoned by Spain and invaded by Morocco. Since then, Sahrawis have waited for the international community find a solution to return to Western Sahara. Up to the present they have stayed in political limbo.

Fatima’s parents sent her to an adoptive family in Spain, so that she could have a better future. As she came back to bury her biological mother, her brother Said asks her to stay and to take over the role of her mother as a pillar of the family. She doubts. Does she really belong here ? Even if her brother Said and sister Hayat still live in the camp, isn’t she meant to stay in Spain ? Fatima is not like other Sahrawi women. She speaks more Spanish than Arabic, wears European clothes and doesn’t pray. A feeling of despair invades her. Even if she just broke up with her Spanish boyfriend, she keeps trying to reach him on the phone. He doesn’t answer.

In Aujourd’hui, the audience never directly experiences what pushed Satché, who was bound for a great future in the U.S., to come back to his native Dakar, Senegal. Did he experience a setback ? “No, I don’t think so”, opines Alain Gomis, the director:

Being abroad is a wonderful experience. You feel free from social pressure. If you wish, you can be someone else than you normally are. But at one point, you have to come back to a place you can call home. It doesn’t have to be like this for everybody, it’s just a personal observation. And this place can be where you grandfather has been buried, but it can also be the place where your family actually is. It doesn’t have to be geographical.

Satché felt the need to sense his roots. Perhaps he discovered in the U.S. who he really is.

“At one moment in life, you realise that you can sit, and travel even more”

Surely, this question follows also Gomis’ path, as he is born in Paris from Senegalese parents, who themselves came initially from Guinea-Bissau. “When you’re young, you’re always on the run, you want to see how big the world is. But at one point, you realize that you can sit, and travel even more.”

In his hometown Dakar, Satché is repeatedly asked why he didn’t stay in the U.S. He doesn’t answer to the provocation, but the audience feels it disturbs him. His American past is just a part of the film’s structure, Satché has to endure other difficult tests, and he finds finally peace.

“The future is brighter in Africa than it is in Europe.” Alain Gomis (c) Katarzyna Swierc

But the negative reactions towards somebody who came back home from a place, where a better future was possible, aren’t so common anymore in Senegal. Gomis clarifies : “With the economic crisis in Europe, people are asking themselves if they should move to Europe or not. The answer is not so clear for them.” With recession in many European countries, it is getting more difficult to start a business or find work. “To launch a business in Europe, you have to find an idea inside another idea !”And prices are rising. “Take a look at Paris. There, people are ready to take a loan for 30 years in order to afford a 60m² flat, which is the minimum space you need for a small family. It doesn’t make sense anymore.”

“If you have a little capital and some experience, you can easily start a small business in Senegal with simple activities, and make a living. I don’t want to give a false impression, life is still very difficult in Senegal, and a lot still depends on your social origin, but there are solutions if you work hard. People start to feel that the future is brighter in Africa than it is in Europe.”

Unlike Satché who has to accept a dreadful destiny outlined in the film, Fatima still has the choice between staying with her biological family in the Sahara or going back to Spain. Acknowledging that her family and the refugees of the camp need help and that she could make a change, her long equivocation ends with the decision to stay and help.

“Women are the ones who are in touch with reality”

Fatima buys a van and is the first woman in the camp doing business. She becomes transport contractor. An unusual role for women, but even if her brother criticises her for “not having even founded a family in Spain” and just being able of “doing men’s work” he begins to respect her for her business acumen. Furthermore, her van changes the daily life of her disabled sister Hayat, whom she takes on her trips and incidentally teaches how to drive. As Hayat says, “to have a car is to be free”, a unquestionable truth in this remote place.

In her very soft, quiet and confident way, Fatima brings new habits to the camp and especially to women. In an interview, the director Pérez Rosado described this process as “cultural crossbreeding” and noted that women are the ones able to introduce changes, because “women create so much light that it projects shadows on men.Women are the ones who are in touch with reality”.

Wilaya and Aujourd’hui show us the most important aspect of skills transfer : the human factor. Both films tell us that the decision to stay or leave is often the result of unpredictable circumstances, a mix of personal, cultural and economic reasons, from which skills transfer is just one side effect. One million Africans live in the US, about 3 million in Europe, how many of them will decide to go back to Africa, if the future gets brighter there ? Or will they stay where they are, having taken new roots ? As the Berber saying goes : “The tree follows the roots”. But which ones ?