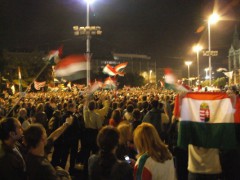 Although one has to be very careful with this comparison, it is possible to see similarities between the events of the Arab Spring and the ‘gentle revolutions’ in Central Europe marking the end of the Cold War. Moreover, the twenty year transition experience of CEE countries may well serve as an example today.

Many Syrians have been killed or tortured by the regime but still people go out and demonstrate. They’d rather die than continue to live under the Assad family.

These words from the article by Ulrike Reinhard lead article remind me of the  annual commemoration of the Hungarian revolution against communism.

There are, however, a lot of differences between the two series of protests. The ones in Central Europe were targeted essentially against an outside power, the Soviet Union, that imposed its system upon CEE countries, while the opposition in Arab countries has to deal with its own dictatorships. The protests in Central Europe were repressed and the Western world took no practical action whereas now we can see very different reactions.

Protesters in Budapest, Hungary in 2006. Photo by Bujatt

Still, the comparison may be interesting, especially in light of what followed the revolutions. In the period 1989-90 CEE countries changed their form of regime to that of multiparty democracy. Then in 1991 the Soviet Union collapsed and the whole Soviet bloc disappeared. After regime change the main goal of CEE countries was to ‘return to Europe’ which meant to embark on a process of integration and democratization. Today these countries are members of the EU and NATO that are considered as functioning democracies and market economies.

It is often noted that the so-called ‘transitional experience,’ or knowledge about the democratization process is a unique asset of Central European countries. It is mentioned mostly as a useful example for the EU’s Eastern partners, but recently has been applied to democratizing Arab countries as well – although here there are limits to its applicability: it’s mainly the side of practical and technical experience that can be useful for them.

While reading the news in CEE countries, however, an insider can sometimes have doubts about the functionality of these democracies. Although calling them dictatorships would be an exaggeration, some ongoing issues can hold general lessons when it comes to the long-term consequences of the ‘transitional experience’.

One of the best examples from Hungary is the confusion one sees every year on October 23, the date of the Hungarian revolution. Especially significant events happened in 2006 and 2011. Instead of commemoration people went onto the streets to protest against the actual situation.

Protests have become increasingly frequent in the last five years in Hungary. In September 2006, a scandal triggered the long-lasting crisis of confidence in the then-ruling left-wing government and the prime minister Ferenc Gyurcsány. It culminated in October 2006 in serious riots. Gyurcsány stepped down in 2009, and in 2010 the parliamentary elections brought to power a new right-wing government led by Viktor Orbán. On October 23, 2011, however, Budapest saw protesters on its streets again, saying “we don’t like the system” and creating a civil initiative on Facebook to protect freedom of the press. The tendency has continued in 2012 as well with protests against the new constitution.

So what can the Arab world learn from Central Europe? Well, surely not the ultimate way of the regime change. There are, however, some noteworthy moments in Central European history that can be meaningful in the Middle Eastern context as well. The uprisings – for example the revolution of 1956 in Hungary – finally led to regime change in 1989/1990. In the case of Hungary, it took three decades to finally reach the goal of the revolution, but it doesn’t necessarily have to take such a long time. The experience of the transition process itself can also offer some practical lessons – this is what experts most often cite as the way by which Central Europe could help the Arab World.

The consolidation period, however, seems to be another very difficult issue. The slogan in Central European countries was the “return to Europe” which indicates that there was a period in their history when they did belong to Europe and share its common values which they can now recall and use as an example. Still, even in these countries the consolidation process is not always completely successful – as we can see, for instance, in the case of Bulgaria or Hungary. In the short run, however, their example – the installation of an understandable and clear system of political power – is important and can be helpful.