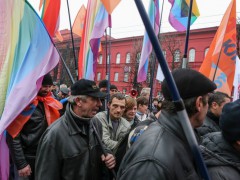 “I come to work and there are two fags there and my boss is kinda a fag too… So I feel discriminated against. Why do I need it? And if a factory manager with painted lips comes … well I’m sorry. I can just imagine how disgusting and humiliating that would be!” – Nikolai Zagoruiko explaining how people in the EU live in his opinion.

Now this man is not a semi-literate stupid philistine. He is an MP in the local parliament in Donetsk (a big industrial city in Eastern Ukraine). “But maybe he’s just a vulgar homophobe?” – you might inquire. Sorry to say but no: homophobia is an unofficial part of the ruling Party of Regions’s political agenda. He’s just toeing the party line

Look at these poor people. You can spot homeless tramps and alcoholics among them. They were hired for a political march decked with opposition and rainbow flags. Journalists found out that all the “protesters” got about 20 EUR and a bottle of vodka for their trouble. The march was intended to show what kind of people want Ukraine to be part of the EU. In peculiar ways like these the ruling party tries to drum up hatred against European values like tolerance and pluralism. Ukraine’s ruling party steers well clear of such values which might well shake its clumsy grasp on power.

And this lunatic anti-EU propaganda is even being spread in some Ukrainian schools among 10-12 year old children. Teachers in Nikolaev (a city near the Black Sea) hand out totally crazy leaflets to their pupils with titles like “What will happen after Ukraine joins the EU”. “Where do homosexuals take children?” – the leaflet ask. ” They implement juvenile justice and with its help confiscate children from normal families to pass them to customers: homosexuals, illegal “black” transplantologists and child pornography producers”. Teachers tell pupils to read the leaflet at home and discuss it with their parents.

Up to October 2013, the ruling party was very interested in EU integration and all the financial benefits it could bring. But in November when it became clear that the EU was not going to hand out a lot of money to our dull-witted government, its plans were radically changed. We should of course choose the EU as a rational part of the globalized world where human rights are respected. But rationality is not pleasing to the ruling party because the truth is always unpleasant.

EU demands included economic reform and an end to political persecution.  But this is too large a sacrifice for people who thirst for absolute power to make. The next day when the sorry failure to reach agreement with the EU made headline news, more than 100, 000 of people came out on the streets, demanding the resignation of their incompetent leaders. Now if you cannot persuade people of your abilities in a rational way, some cobbled together conspiracy theories are a useful way to scare them. The European homosexual plot is one sick fantasy of our rulers. Nor is it the only one, unfortunately. After all, a mass of uneducated, parochial people is easier to manipulate than people who believe in individual freedom, respect for difference and tolerance.

Globalization does indeed offer a real information overload and it is difficult to find the truth in the endless news stream, especially for poorly educated people. It seems that our ruling party has decided to take advantage of such an opening in our globalized world. But instead of opening a gate to lucidity, clarity, and rationality, they are polishing a false mirror of rumours and building an iron curtain of lies. It’s the only way they can cling to power.