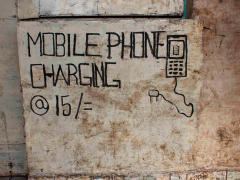 Visiting a slum in Kenya was like stepping into another world, from a humongous five star hotel to crowded, dusty streets. Everything in less than 10 minutes. Being honest, this was not a completely new experience for me, as I am used to seeing and living between disparities. I was born and have lived most of my life in a city of contrasts: Mexico City. And since I was a child, I always wondered: how do people make a living in a slum?

People who migrate from rural areas to big cities want to earn some money by getting a job inside the city. With low salaries, these migrants commonly form informal settlements as they cannot afford living downtown. These slums continuously grow around Nairobi. Some others work inside the neighbourhood as they have to provide sustenance for them and their complete family.

By observing some routine activities around me when I visited Mathare slum, situated three miles east of the central business district of Nairobi, the following were some peculiar jobs inhabitants fulfilled to earn for living:

– Mobile charging: Residents of the slum in Mathare payed a couple of cents everyday to get their mobile phones charged at small, local shops. This happens because inside their homes they do not have power supply.

– Poverty Tourism: The streets of slums in Nairobi attract tourists. Local organisations and individuals started selling guided trips through some parts of the informal settlements, offering a sight into the lives of thousands of people crammed inside their small houses.

– Emptying toilets: Congestion and education are two big problems in the slums, as some inhabitants of Mathare told me. Because of these, emptying shared latrines is an unhealthy but common job inside informal settlements. This is better illustrated in World Bank’s video “Kibera Kenya – Understanding Small Scale Service Providers”

– Motorcycle taxis: A two-wheeled motorbike service that offers speed and security for inhabitants inside a slum. I was able to get a ride on one of these motorbikes in Nairobi’s periferia and I must admit it felt safer than walking around the dirt paths of the slum in the middle of the night.

The series of photos below was taken to show the living conditions of people living in Mathare slum in Kenya.