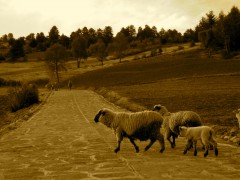 “Justice, land and freedom”, a famous saying went during the Mexican Revolution. Today, Mexico’s land represents more than simply a percent of GDP; Mexico’s land has been for centuries a symbol of its culture and identity. Unfortunately, the poor management and constant degradation of this precious resource may one day represent food insecurity for its own population – sooner rather than later.

Poor soil conditions have a significant impact on the 38 million Mexicans who live in rural areas and earn their living mostly from agriculture. From the 145 million hectares devoted to agricultural activities (30 millions for harvesting and 115 millions for pastures), at least 60% of the land has already suffered varying degrees of degradation for several reasons, particularly erosion.

These harmful effects on our land come from two main sources. First, a constantly changing weather due to global warming that tends to alter the environment farmers are used to typically working in, making it very difficult to protect the crops from unusual natural conditions. Second, the overexploitation and incorrect management of our soils and irrigation sources are based on a very limited short-term perspective.

For example, at the Sierra Tarahumara –a mountain range found in Northeast Mexico, known widely for the indigenous cultural diversity it shelters– cold temperatures and extreme drought in January 2012 left approximately 24,000 Rarámuri families without food. While the indigenous farmers can’t control the impacts of frozen crops due to the deep freeze, strong droughts like these could be prevented if the government effectively limited the overexploitation of the aquifers and the excessive deforestation that impedes the natural course of resource renewal as well as the irrigation of the lands.

But Rarámuris are not the only farmers in this dire situation. Ironically, six out of ten Mexicans suffering from food poverty are farmers. Poor education and economic conditions for those living in rural areas result in poor management of land use, degrading its conditions and thus leading them to a cycle of continuous poverty.

In addition, the high levels of pollution in water and soil oblige the already poor farmers to either pay for expensive chemicals or consequently see their land lose productivity. What can these farmers possibly do when their production is decreasing, their fields are degrading, they have no additional money to invest, and the “invisible hand” of the market is underpaying their products?

The government must help share the burden of farmers’ increasing hardships. It is necessary to assist farmers with education or financial provisions in order to maintain the quality of their land so that they can practice self-sustainability and avoid the effects of worsening food insecurity.

Even though land in Mexico has always been and continues to be prevalent, we must now start considering that our future is in danger. It is expected that by the year 2050 Mexico will loose approximately 27% of its agricultural land. This would create serious economic problems (mostly at the local level), greater food insecurity for farmers, a loss of natural services such as hydrological regulation and a crucial loss of biodiversity.

One hundred years later the demands of the Mexican Revolution seem to be insufficient. It is not just “land” that we’re calling for; it is “Justice, fertile land and freedom”.