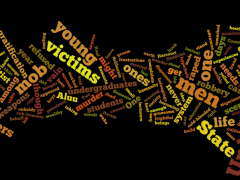 In my first year as a Mass Communication student at Ebonyi State University, I was terrorized by a course mate who started with wanting me to write up his essay for him. When I refused, he said if we were married I wouldn’t have refused him and so he was going to marry me.

For the next six months this guy, a cultist, made my life a living hell. He stalked, mocked, threatened my friends and I, even bought matching rings and sent one of them to me. Long, horrible story. One day he yelled at me and then pushed me against a row of shelves in a book store opposite my campus, I fell (one of the most undignified moments of my life because I had a skirt  on).

Anyone who’s been through a Nigerian University in the last 15 – 20 years understands this experience. Some ladies got worse than I did, some were raped, beaten, even bathed in acid for refusing the advances of a cultist. Mostly, their assailants went free. Campus cultists are empowered by weapons and the occult. They decide who joins them, recruit whom they choose and wielding frightful weapons, wreak havoc on campus.

Unforgiving, they would hunt offenders to the ends of the earth. Like Chima, who renounced cultism and left Abia State University for Enugu State University of Science and Technology, and then to my university.  They traced, found, and killed him in our final year.

And lecturers. The ones among them who had no idea what they were to teach, the ones who specialized in taking out their frustrations on the class, and then the ones who would pass or fail students based on financial or sexual gratification. Like the one who gave me an ‘E’ and, when I complained, remarked: ‘so I finally have your attention‘. My memories from that school would give you literature for days.

Then there are the armed robbers, devils whose sole mission is to dispossess others of their belongings. Without beating hearts, they plunder, rape, and leave tears, misery, and death in their wake.

One common theme in all these scenarios is that there is no justice for the victims. The victims do not speak up because they are afraid, ashamed, or simply because they know their complaints will be in vain. In vain because the perpetrators are never caught, and when they are, their wealthy parents get them off the hook faster than their hurt heals. Bottom line, there is no faith in the judicial system.

On the four undergraduates at the University of Port Harcourt, ‘allegedly’ caught in the act of armed robbery, in Aluu, a small town in Rivers State, who were stripped naked then lynched by a mob that included women and what appeared to be teenagers, one may ask: who are the victims?

The dead undergraduates, the mob or a society that is becoming increasingly inured to the bestial circumstances of daily life in Nigeria amidst the harrowing experiences of roof-high floods caused by a failure to build dams, Boko Haram attacks against students whose only crime is to seek ‘Western‘ education, policemen shooting a newly-wed groom and smiling young men, unapologetic sons of ‘big men‘  accused of engaging in  petroleum subsidy fraud. Who are the victims?

Have we become this debased, this morally bankrupt though? Have we sacrificed our humanity on the altar of  instant gratification and impunity? The Aluu lynching is so scary because people stood there recording the scene. They didn’t think to call the Police (would they have come?), or stage an intervention on behalf of the young men (and perhaps get killed along with the young men?).

Someone uploaded a 3-minute video of the gruesome scene and for a few days that will be the news from Nigeria. How could anyone stand there and film the brutal murder of other human beings? Not even animals commit such random acts of senseless killing (yes, the hyperbole is deliberate).

You might say that if I’ve ever had a gun to my head, been the victim of a robbery, watched a friend or family member raped or killed by robbers I would be among that mob. I disagree. I am not an sub-human. We, Nigerians, are not sub-humans.

Two wrongs will never make a right. Those young men might have been armed robbers, but the mob that beat them are guilty of cold-blooded, vicious murder. End of discussion. Our justice system needs to be overhauled, and vigilante groups disbanded. The people’s trust in the laws of the land being enough for them needs to be brought back. Starting from the killers of these boys.

Somehow, though, I wonder.