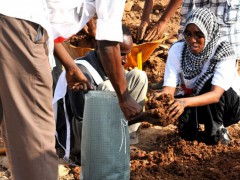 The Salzburg Trilogue is an annual event hosted by the Bertelsmann Stiftung. This year it took place on 18-20 August and convened to examine the following proposition: Any effort to bring about real change in our global economic, financial and social order will be doomed to failure unless we succeed in clarifying and establishing universal terms for the goals and social norms that can guide global development and help to resolve conflicts between the interests of individuals, society and the environment.

Noble aims. The big question is how can they be achieved?

Any breakthrough on a political level appears unlikely. Too many initiatives such as the ‘World Economic Council’, the ‘Charter for Sustainable Economic Activity’ or the ‘Global New Deal’ have ended up in a froth of good intentions – none of these calls to action has ever been put into practice. People no longer trust their governments and policy-makers. They neither believe that they can provide the right answers to our problems nor that the answers they do give will be sustainable. Politicians, they believe, focus on short-term gains like winning the next election, rather than proposing unpopular long-term solutions with possibly painful restrictions.

The same is true for our financial markets and for parts of our economies.

So it’s up to all of us, to civil society, to work towards such a frameset or agreement. It’s a huge challenge, “terrifically difficult,” as Dennis Snower, president of the Kiel Institute for the World Economy, puts it. “But global citizenship can only live and breathe when we engage with others,” he says. And I guess he’s right! We should start today, if not for ourselves, then for our children – we should tread softly on their dreams! As Liz Mohn, vice-chair of the Bertelsmann Stiftung Executive Board says, commenting on the findings of a recent poll on global governance: “We have to do everything in our power to push for a binding set of regulations that effectively protects our environment, conserves our natural resources for our children and regulates the international financial markets.”

A Normative Framework for Global Governance

Creating a common set of principles and norms – in future maybe even values – that transcend cultures and religions and provide a basis for us to work and live together is not at all easy. But it’s needed. And better sooner than later, as all the participants agreed. It’s very abstract, there’s nothing definite to grasp – yet it touches all our lives in very significant ways: scarcity of resources, unemployment, terror attacks, company shutdowns, ever-changing political leaders, banks and entire countries collapsing, famines, floods, hurricanes, destruction of our natural environment and violations of human rights for the sake of economic interests, the Arab Spring, the London riots… you name it.

Such a broad range of follow-on effects clearly shows that we are not talking just about politics or economics or education or financial markets or the environment – we are talking about society as a whole. And not about society based on any nation state, but about our planet and its entire community; a system that covers everyone in every field. Malte Boecker, Senior Expert at the Bertelsmann Stiftung, calls it “The Greater WE”. A system that no longer makes a divide between East and West, one in which so-called ‘developing countries’ will be included as equal partners in decision-making processes (as one African delegate passionately demanded) and one in which we try to balance all our needs constantly in an effort to achieve the very best for the entire system, not just for a fortunate few.

So what could these organizing principles or norms be?

The hypothesis of Sean Cleary’s paper is that a triadic structure will emerge, that recognizes the need: to subordinate key global public goods, and certain areas that threaten a tragedy of the commons, to supranational systems; to cooperate more closely and harmonize rules on human rights, trade, financial flows and security (e.g., weapons of mass destruction, terrorism, pandemic control); and to commit to common objectives in other areas, without necessarily creating institutions to control or enforce compliance.

Let everybody participate equally. Collaborate beyond borders and disciplines. Take responsibility not only for ourselves, but for others too. Inclusiveness, not exclusiveness. Long-term thinking not short-term solutions. Connectivity. And Integrity – let quality not power control! And finally banish the invisible hand – say no to lobbyism!

The most radical approach was given by Chandran Nair, founder of the Global Institute for Tomorrow. Turning to our politicians and corporate managers, this Hong Kong-based unconventional thinker argued passionately for more honesty. He challenged us to commit ourselves to fundamental restrictions – because with a population of seven billion people living on this planet we cannot continue to consume as we have done over the past decades in the western world – and not to punish our governments when they act accordingly. He asked for a stronger state. He asked economists to leave Adam Smith behind. And he suggested we stop thinking of the world as being dominated by one particular region – many people say it’s now Asia after a long period of American dominance succeeded European control – and urged us instead to start thinking of the world as one global community.

Charting the Path to a Better System

These are high aims – but the question remains what civil society can do to achieve them. How shall we proceed? How do we create a genuine cyber organization? Or how do we turn existing rules and organizations such as the IOM – International Organization for Migration or the UN – into organizations that aren’t dominated by those with money and power?

Unfortunately there was only limited time to discuss these issues and only a few very practical ideas were mentioned. But that only makes space for us first to discuss the ones we have and second to come up with new ones. You are invited to do so! Please continue the discussion on our platform. Besides the virtual discussion we will also continue it for ‘real’ at the Global Economic Symposium in Kiel from 4-6 October.

Here is a shortlist of what came out of Salzburg, with a few follow-up questions:

These are glimpses of a vision of a new way of being in the world. It will take a lot of people – people like you and me, like us – feeling in their guts and thinking with their hearts to try and understand what this ‘Greater WE’ is all about.
The answer isn’t there in a book. It’s not there in a formula. It is something that we have to live together and co-create.
After all, our diversity and creativity is sufficiently stunning to carry us! Isn’t it?

Image courtesy of US Army Africa