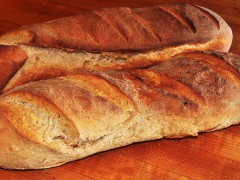 Roughly ten years ago I was in a rural community in the south of Costa Rica as the team leader of a group of 14 volunteers who came from different first world countries. The idea was that they would have a chance to work with grass-roots organizations and travel to an exotic destination for close to three months. The nicest local woman lived right next door to our temporary home, and I would go to her house sometimes, not only because it was warm and welcoming, with  its red polished concrete floors sparkling in the slanted sunlight coming through the windows, but mostly because it gave me a chance to get away and speak Spanish after days of dealing with volunteers in English. That day I had gone to her kitchen thinking I’d learn how to make some bread. But I left not only with bread, but also mulling deep thoughts about the relativity of poverty and what progress means.

Making bread instead of spending dough. Photo by JeffreyW on Flickr, CC BY 2.0.

According to Costa Rican statistics, her family and most of the other families in the community were all considered poor. They were subsistence farmers in rural Costa Rica, they produced coffee and didn’t make much income except in the coffee picking season. The rest of the year they raised some animals and  cultivated their land which they had been able to settle on when that part of Costa Rica was up for whoever wanted land which was mostly free for the taking. They were working hard to get a sustainable organic producers co-op going so that they could sell their organic vegetables at higher prices all year round, or maybe even export some as well as bringing in the tourists. But whenever they came in contact with government people,  it seemed like they all were walking around with “POOR” tattooed on their foreheads. And when talking with my neighbor and her son, I realized that this label and the stigma attached to it weighed heavily on them and the community. Both my neighbor and her son believed that despite what government statistics might say, they were not poor, or at least not in the way they defined the term. They were rich in many things that urban dwellers lacked, things conveniently not included in the statistics. For instance, access to fresh air, sweet spring water and fruits and vegetables grown without chemicals. Things like growing up knowing how to value the planet we live on.

Despite what I’m sure are the very best efforts to get numbers and accurate statistics on poverty, it seems to me that whatever ratings are used, they do not allow for lifestyles diverging from those of a purchasing-power based urban consumerist society. At least in Costa Rica, poverty measuring instruments are based on making enough money to buy food staples. Men and women who raise chickens, take care of pigs, bake their own bread and have a garden are not considered income-producing, although they will get food on the table, and thus save money that will not be spent on food. But the message that permeates society and gets through to the youth is loud and clear: what matters most is your salary.

Many families don’t have enough food to eat but this was not the case with my neighbor’s family. While their diet did not include the junk food and sodas of fast food restaurants, they were eating healthy, wholesome, in-season and mostly organic food. But because they were in a rural area, it was seen as poverty, and not a healthy trend that should be emulated. If they used cloth diapers instead of store-bought ones, they were considered too poor to buy diapers. If they drank lemonade sweetened with sugar cane juice, it was considered as the “cheap” alternative to sodas. Baking bread was seen as a less desirable option to store bought sliced bread.

Many of the young men in their community had migrated to the USA, sometimes illegally in the search of money or better opportunities. Some succeeded and sent money home, a few returned, burdened with debt. Others had seen this play out in friends and family and decided to stay home and improve the community’s way of life without buying into this idea of progress that was tied to a paycheck and had nothing to do with the quality of life. They worked hard to build up this community, and it seems they’ve succeeded.

Today I look back at this farming community in a mixture of nostalgia and hope. A quick search online showed me that the organization they were boldly starting to build and grow is now a fully fledged sustainable organization, and that the dreams and plans we talked about back then have come true. I look online at reviews and see the names of young men I knew back then pop-up and I know they stayed and made a good life for themselves. I look at my gentrifying urban neighborhood in Washington DC and see that it is now trendy to eat organic, to have no TV at home, to leave a low carbon footprint, to use cloth diapers and forgo sodas. They were visionaries back then in Asoprola, using recycled materials to build and create landmark art, and I sincerely hope that the children growing up there now are not receiving the message that poverty is defined by “not having”. Because in my experience, sometimes those who have the most are the poorest of them all.