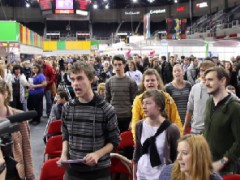 Education is one of the keys that can help developing countries cope with the negative effects of their development status and reach strong economic growth – or even change their status from “developing” to “developed”. Higher education aimed at professionals and scholars can be the core of such processes, so it is easily understandable why (not only developing) countries should put such an emphasis on it. Best practices are always there to follow; there is, however, a great number of “worst practices” as well. One of the latest worst practices in higher education reform comes from Hungary where disproportionate cuts in the number of places and increases in tuition fees have been introduced along with a regulation that binds graduate students to working in the country.

Against the backdrop of a poor economic outlook, the last few years in Hungary have revolved around the question of austerity measures. The Gyurcsány government intended to introduce a general tuition fee, called a “partial development contribution” of 345€/year for Bachelor and 490€/year for Master degree level students. The move was planned for September 2008, but in the so-called “social referendum” of the same year the vast majority of Hungarians voted against the general tuition fee. Consequently, the number of state-financed places in higher education remained high – at 56,000 of the 80 924 available places or almost 70 percent. Although Fidesz, the party currently in power, declared in March 2011 that “the concept of tuition fees completely failed in the Gyurcsány government-era,” regulations introduced in December 2011 have radically changed this situation.

One of the first demonstrations against higher education reform - the rose refers to Rózsa Hoffmann, the Secretary of State for Education. (Source: nol.hu)

The government’s official intention was to meet market needs and set up a national job market strategy. Definition of the number of state-supported places therefore fell within prime minister Viktor Orbán’s personal authority. In 2011, 141,000 students applied for universities and colleges, 98, 000 of them for a Bachelor’s degree course, 84 percent of whom (82,241 people) applied primarily for state-financed places. 65,202 of them were accepted for Bachelor’s studies and 40,770 got the full tuition fee waiver. In 2012, however, only 28,007 Bachelor course students will get the full financial support of the state, while 15,550 Bachelor students will be offered a partial tuition fee waiver. The change in the number of students supported is not so significant, however, as the change in support for certain academic fields.

The reform focuses on state support mainly for students of science and engineering. There will be 4,000 state-financed Bachelor science course students in 2012, while in 2011 the number of all science students was 5,843 (irrespective of level or waiver). In engineering, 8,000 Bachelor students will get a full tuition fee waiver, while the number of all students accepted (irrespective of level or waiver) was 15,111 in 2011. The biggest losers of the reform are the fields of law and economics. In the 2012 autumn semester only 100 students can begin their law studies with a full tuition fee waiver, and there will be only 250 state-financed first-years in economics. This means that in comparison with last year, the number of supported law students will be reduced by 8 (!) times and the number of economics students by a staggering 20 times.

Moreover, six universities have to abolish their offers of state-financed places in the field of law. At the most famous university of economics, the Corvinus University of Budapest, only 75 state-financed Bachelor places remained for students of economics – meaning that all the other institutions have to divide the remaining 175 places between them.

These serious cuts go directly against the grain of perceived job market trends. Although it is true that there was an “over-production” of lawyers and economists in the previous years, the number of such professionals in Hungary is still much lower than the EU-average. Moreover, lawyers and economists still belong to the most popular professions on the Hungarian job market. Official government policy concentrates on science and engineering in an approach that can be justified by the low ratio of unemployed people in the field (4 percent). However, the second most employed field is none other than economics-law-social sciences (6.5 percent unemployed). Reflecting on these numbers, the conclusion can be drawn that these cuts really are ill-proportioned. But not only the reduction in the number of places matters – as tuition fees also skyrocket. The tuition fee for Bachelors degree courses between 980€ and 6 690€/year is significantly higher than in many other European countries.

There are many complaints about the reform, the most frequent ones are that these regulations only boost reproduction of elites and exclude poorer more talented students from higher education, thus completely blocking the paths of social mobility. Moreover, because such steps are incompatible with major job market trends, many accusations have been levelled against the government that it wants to reduce the number of social experts. According to some radical critical voices, such moves are purely about suppressing criticism of government actions – if there are no experts, there simply is no more well-founded criticism!

Students protest against the reform of the higher education system by heckling the speech of the president of the Office of Education, 20. January 2012 at the Educatio fair (video). (Source: mohaonline.hu)

The most serious complaints, however, occur in connection with the regulation that binds graduate students to their country. From 2012 onwards, students have to sign a contract with the state in which they undertake that in the following 20 years (!) after graduation they will work in Hungary for twice the time they spend in higher education. This means at least 6 years for a Bachelor’s and 10 for a Master’s degree course student. If graduates don’t meet this requirement, they have to pay back the tuition waiver. There is one sole condition for exemption: if a graduate gives birth to at least three children. The European Union (still) has not expressed its concerns about this regulation; however, it goes visibly against the free flow of workers that is one of the main pillars of the EU market.

All in all, it can be expected that the reform of higher education in Hungary will not solve the financial problems of the state, even if it focuses on the reduction of costs and increases in income. Moreover, the situation could well take a turn to the worse, as the poorer sections of society are effectively excluded from higher education.

The reform will possibly have negative effects on the job market and economic growth and worsen the competitiveness of the country – even if the newly graduated students are obliged to stay put at home. They can sidestep this situation by studying abroad, especially as in neighbouring Austria and Slovakia higher education is free. A steady drop in the number of students could lead to the closure of many departments, faculties and even colleges or universities, not to mention the number of the university professors who will lose their jobs. Another clash with the EU would further diminish the standing of Hungary in the international community. So, in this case, developing countries are offered a “worst practice” that could well push Hungary much further down the list of developed countries.