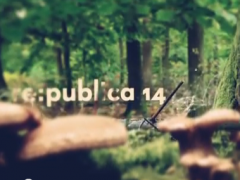 It’s that time again: re:publica (#RP14), the meeting of likeminded people who for the rest of the year seem to be in their own universe, will happen again at the beginning of May. This large national and international convening of the Blogosphere offers the annual opportunity for people, even those that live in the countryside, to meet at a central location and exchange ideas with people that they may have previously only known online.

Tolerance, diversity, relaxed interaction, and broadening horizons are the values that make it worthwhile to spend a full three days in Berlin, in order to take a piece of this inner attitude back from the city.

A special session for the planned free trade agreement TTIP will be offered at # RP14 by our international blogger platform www.futurechallenges.org (founded by the Bertelsmann Foundation) in cooperation with the Internet and Society Collaboratory. The purpose of the panel will not be to analyze individual regulations on genetically modified corn or chlorine-washed chicken, but to ask, given the framework of the # RP14, the why the values of participation, transparency, the redefinition of global trade, and the wishes of the people have appeared to fall short in these negotiations.

In an agreement in which the internet itself has become a subject, why is the internet not used to involved the people who will be directly affected by the trade agreement?

The basis of these considerations has been presented in recent publications by both partners. The discussions are by no means a rejection of free trade; instead they question how a modern definition of free trade can be implemented which includes the internet and is in collaboration with the nearly 1 billion people on both sides of the Atlantic.

We welcome you to join us on May 6 for a discussion on these issues:

We aim to establish an open, tolerant, but also critical debate on the controversial free trade agreement TTIP and invite all interested parties to participate.