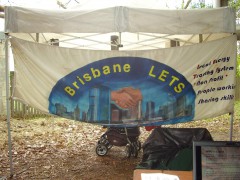 Governance isn’t the only thing that is being taken into the hands of civil society. In Australia, the entire premise of the market system is also being reworked. If the state reneges on its promise to provide basic services, the opposite effect will happen – people will start taking things into their own hands.

A LETS (Local Energy Trading System) is a community-based non-profit trading system that allows its members to exchange goods and services using little or no cash. Rather than exchanging money, members exchange a unit of local currency representing their skills and time, not as an alternative to conventional money but to complement the current system of trade. As demonstrated by the recent global financial crisis, the current economic system is clearly unstable, and moreover, inequitable, reinforcing the gap between the rich and poor. Linton and Soutar, the founders of LETS, suggest that perhaps the major problem lies in conventional money and the form that it takes.

Every modern community depends on the flow of national currency through its economy. Money flows into the community via exports, visitors and government spending, and flows out via imports, travel and taxes. While competing for a share of this limited supply, people work in ways that damage their health, the environment and community well-being.

Linton and Soutar argue that money has no value in itself, but merely represents the time and energy individuals have invested in earning it. However, because there is a limited amount of money available, those without the means to earn it are often left on the brink. The LETS system aims to avoid this problem by creating local “money” (units) that stays within the community by valuing people’s skills and time, whether “skilled” or “unskilled,” thereby protecting them from poverty and the whims of the market place.

I recently had the privilege of interviewing 2 representatives of LETS systems in Brisbane and Maleny (a smaller town in the Sunshine Coast hinterland) to find out how LETS works in practice. I was surprised to find out that the Maleny group, despite its smaller population, had a larger number of active members, and I was curious to find out what made it so successful.

According to Ann Jupp, committee member of Maleny LETS, the group was first founded in 1987 – the first LETS in Australia. With approximately 180 to 200 active members, they are thriving, considering the entire population of Maleny is less than 4000. Members range from hippies to housewives and professionals as well. The majority of units (bunyas) traded are in the alternative health sector including reiki and massage, but can range from anything from house cleaning and babysitting to plumbing. The amount of bunyas exchanged is negotiated on a one-to-one basis between the “buyer” and “seller.” Since joining the Community Exchange website 3 years ago, the group has exchanged over 800, 000 bunyas.

Ann believes the success of the Maleny group is largely due to the “community mindedness” of the community. The group is promoted mostly through face-to-face social networking.There is even a co-operative cafe in town, the Upfront Club, which provides meals for bunya’s on Sunday nights, and where LETS members can advertise their services. Members who volunteer at the cafe are paid in bunyas, which they can then use for meals, etc.

The Brisbane LETS group, on the other hand, faces challenges due to its geographic size. According to Liz Stanhope, secretary, there are approximately 200 members (including about 60 active members), but people from the north probably don’t trade with people from the south. They have a market day once a month, where people are able to trade produce or goods for units. When asked if they had considered establishing “local groups” that might help members do get to know each other on a more personal level, she mentioned they had thought about it, but hadn’t worked out a sure system to make it work.

The LETS members I interviewed demonstrate how a local currency can strengthen community resilience. According to Ann, this is the reason she has stayed with it for so long. “It’s a great equaliser, it means that people who have not got the dollars, can still get what they want. It’s also a very gentle and organic way of looking at trading within the community.” What makes it even better, is that trades can be undertaken between communities, interstate and even internationally. There are now some 200 LETS groups in Australia, among the most numerous of all countries. Recently, a group from BrisLETS went to watch the solar eclipse in Cairns and traded units for accommodation. There is even an online system that allows members to connect with LETS groups across the globe. The success of the Maleny group, in particular, shows how an alternative currency can strengthen community well-being and sense of identity. In hard financial times like these, it is certainly an example that other communities may do well to follow.

For an online demonstration of LETS at work, click on the following link.