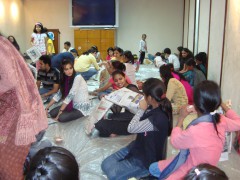 Years of mindless exploitation have led to global warming and climate change with their natural calamities and chronic pollution. We are all responsible for not having made prudent and conscious use of our valuable natural resources. India is not far behind when it comes to environmental problems like pollution resulting from vehicle emissions, factories, garbage and overuse of plastics. Slowly but surely Indians are now getting hooked to processed foods and cosmetics.

Mother Earth or Prithvi Mata as we call her in India, is worshipped by the majority of Hindus. A religious ceremony called Bhoomi Pujan (worship of earth) is of great significance and is usually performed before moving into a new house or office complex. It is done to sanctify the land which is considered as sacred and worshipped as Mother Earth.

Festivals are celebrated throughout India and religious practices and rituals form an important part of our lives. Diwali, Holi, and Ganesh Chaturthi involve bursting fire crackers, using chemical colours and immersing idols of the elephant headed god Ganesh in rivers and other water bodies. These idols are normally made of plaster of Paris  and painted with colours that contain toxins. Little do we realize how harmful they are for  our water bodies. When asking blessings of the Almighty, we are certainly forgetting to look at the bigger picture and the more critical issues related to our environment .

But it’s not all  bleak. Fortunately in the past few years people have become more ecologically conscious here and are trying out different means to conserve the earth and the environment, whether it’s by raising awareness about environmental conservation though programmes or by introducing environmental studies in the curriculum, adapting alternative lifestyles or using organic products. At least many people now acknowledge the significance of  World Earth Day or Environmental Day and use these days to spread awareness and educate the general public. Some educational institutions, the Government and NGOs have used these celebrations as an instrument to spread the word on conserving the environment.

The Earth Day Mela (festival) which I attended last week at the American Centre in New Delhi was quite interesting. In collaboration with the Kriti Team, Cine Darbaar, the World Wide Fund for Nature and the All India Artisans and Craftworkers Welfare Association, the American Centre celebrated Earth Day on 21st and 22nd April. The Festival put on a full range of fun activities, film screenings, a music concert, puppet shows, and art-music-imaging workshops all with the aim of raising appreciation of the natural environment.

An earth craft bazaar offered a wide range of eco-friendly goods from bags, stationary, jewellery, and clothes to handicrafts, organic pickles, grain, pulses, vegetables and other food items. The Art for the Earth workshop was a creative visualization activity with theatre and movement that used waste materials, paints, brushes and newspapers to foster sensitivity among young people – all  linked to their pledge for Earth Day. In the Conserving the Earth workshop the audience (using mixed media) was encouraged to preserve the earth and create their own poems, stories, images and products to save the earth. Another workshop, the Earth Sounds and Images workshop, taught children about music & lyrics and nature photography and its techniques. Yet another provided children and adults with an opportunity to create and colour their own tote bags.
The E

arth Café served healthy drinks like  herbal teas and some interesting food items prepared by the eco café chefs. Kriti basically promotes ethical, green and socially conscious thinking and encourages the purchase of community-made products. They  also promote a range of imaginatively made alternative andeco-friendly products made by women, street children and community groups from across India. An Earth Day musical concert which I was unfortunately not able to attend also formed part of the programme.

Along with all this, Rahul Kumar our blogger from Future Challenges exhibited his photographs on nature, the Greens of Delhi under the title “Green Art”  to mark Earth Day on both the days of the Festival. The photos were taken over the past two years at various ecologically significant green spaces in Delhi as  part of his collaboration with Kriti.

Photo below taken by Rahul Kumar

Cities across the whole of India celebrated. In an effort to raise awareness about the state of the global environment the Government of Punjab  announced last week that it will introduce heavy penalties for the use of polythene bags less than 30 microns in size and banned manufacture and distribution of the smallest polythene bags. Bags 30 microns and less  were targeted because they are more likely to be carried by the wind and pollute land and public waterways.

Whatever ways we choose to save the earth, whether through individual or collective  efforts, the aim should always be conservation. It may be through recycling, reusing, trying to cut down on our vehicle pollution, avoiding plastics, saving water, planting trees, using natural & organic products or eating unprocessed foods. Only if we show appreciation of nature and the earth by conserving our natural environment and avoid overusing it, will we see results and also leave plenty of resources for future generations.