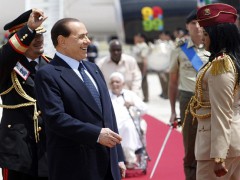 European interests in postwar Libya – oil, sales of arms and halting immigration – are likely to prevail over any humanitarian concerns and sap at the foundations of any fledgling democracy.

Over-endowment in natural resources is often a domestic source of dysfunctional and despotic government. However, a “resource curse” often also exists in the sense of the less-than-benign attention of foreign powers those resources bring.

This is true above all for oil, the cheap provision of which fueled the postwar economic boom in Europe and North America, and whose curtailment in turn sparked the stagflation of the 1970s. The resource also provides a lucrative area of investment for Western companies and opportunities to shore up the resulting trade deficits with arms sales to the local government.

For the West, good relations with such a government, its stability and ability provide a steady supply of oil are likely to be important than however it might treat its people. On occasion this can go as far as the active subversion of elected leaders who attempt to nationalize their country’s natural resources, the most recent example of which being perhaps the failed 2002 coup attempt against Hugo Chávez of Venezuela.

The Europeans and Libya: A poor track record

The case prewar Libya was no exception. With the largest proven oil reserves in Africa reaching 47 billion barrels, the fossil fuel has played an important role in European-Libyan relations, along with issues such as security and the fight against immigration.

The ties between Rome and Tripoli were once the closest, understandably so given that Italy is both most vulnerable to migrants transiting via Libya and depends on the North African country for a third of its total energy. The notoriously chummy relations between Prime Minister Silvio Berlusconi and Muammar Gaddafi have received a good deal of attention, but Italy was hardly alone in this.

For all their indignation at Gaddafi’s dictatorship for its flaunting of human rights, this did not prevent close cooperation between Libya and U.S. and British intelligence services, as recently revealed by hundreds of thousands of uncovered documents, which included sending terrorism suspects to Libya for interrogation.

At the same time, all major (and some not-so-major) European countries were involved in selling arms to Libya, helping to provide the brute force all dictatorships need to retain their power. The European Union’s official figures estimate arms sales at €343 million for 2009 alone, Italy predictably in the lead at €112 million. The other biggest sellers were Germany, Great Britain and France.

The EU’s official “strategy paper” describing the “framework for relations between the EU/EC and Libya” neatly sidestepped any question of ethics and dictatorship by straight-facedly describing the country in clinically bureaucratic language as “a ‘Jamahiriya’, which is a form of direct democracy under which power is entrusted to the people through their participation in local basic popular congresses (BPCs).”

Of all the concerns European governments had with Libya, democracy and human rights appear to have been far down the list behind oil investment and supply, arms sales, and the “War on Terror”.

It will no doubt take many historians’ study to determine the motivations whereby the leadership of France, Great Britain and the United States decided to go to war against Gaddafi, causing a split with Italy and Germany.

As often with wars, the stated objectives changed, going from preempting a supposed massacre in Benghazi to regime change and its natural corollary: the establishment of a democracy. In his brief speech to a rapturous crowd in Benghazi last week, Sarkozy reached near-Gaullian heights:

You wanted peace. You wanted freedom. You wanted economic progress. France, Great Britain and Europe will always be on the side of the Libyan people.

Sarkozy went on to declare in another speech in New York that “the sooner this Libyan democracy is put in place, the better.” Similarly, the Secretary-General of NATO Anders Fogh Rasmussen claimed on Twitter that “NATO has helped Libya move from dictatorship to democracy” and, more than that, that “positive trends” there “are irreversible”.

No doubt almost any new regime is an improvement upon Gaddafi’s personal tyranny. Nonetheless, for any lasting democratization to take place, one would also need European governments to be less willing to overlook Tripoli’s human rights record instead of narrowly focusing on material or electoral interest. While we must remain cautious in our assessments of such recent events, the evidence thus far suggests these traditional interests are as important as ever.

On oil, Glenn Greenwald suggests with his trademark sarcasm that it was not entirely coincidental if Gaddafi began impeding Western oil interests prior to the war. Earlier this month, Libération published a letter allegedly signed by Libya’s National Transition Council promising “35% of crude oil to the French in exchange for total and permanent support to our Council.” Foreign Minister Alain Juppé reacted without surprise on French radio saying:

The NTC has said very publicly that, in the reconstruction effort, it would give preferential treatment to those who supported them. That seems quite logical and fair.

Following such reasoning, France is deserving of truly substantial “preferential treatment”: the country was consistently the most hawkish, pushing for the U.N. resolution for the no-fly-zone, being the first to fire with its aircraft, as well as to provide arms to the rebels.

The advocates of intervention often see no contradiction between baser and higher motives. Instead, one has a “win-win” situation: If some oil concessions worth tens of billions of Euros happen to help compensate for the costs of the war, incidentally about €300-350 million for France, then isn’t it a good investment in addition to being a good cause? Such reasoning overlooks the corrosive influence oil is likely to play in postwar politics or what these events tell us about the priorities of foreign governments in Libya.

Finally, we can note that Western policy throughout the war – though declared on humanitarian grounds – was distinctly insensitive to the humanitarian problems it caused. As early as May, almost 700,000 refugees had fled Libya to establish themselves in Tunisia and Egypt. The trickle of refugees who attempted to flee to Europe by boat – many of them black Africans suspected by the Libyans of being Gaddafi-loyalist mercenaries – were ignored and often died before they reached the shores of Italy. Amnesty International recently qualified EU countries’ response to this refugee crisis as “abysmal”, estimating that 1,500 people had died at sea since the beginning of the conflict.

Indeed, rather than do anything to alleviate the suffering of the refugees, the traditional anti-immigrant reflexes held sway. Sarkozy and Berlusconi found time last April to get together to re-impose border controls in the EU’s borderless Schengen Area, prompted by the arrival in Italy since the beginning of the year of an estimated 15,000 migrants from Tunisia.

If past examples of Western military intervention in the world, and in particular the Muslim World, are anything to go by, we can be distinctly pessimistic about the emerging Libyan regime’s potential for democracy.

The worst-case scenario would be for Libya’s civil war to continue indefinitely. The war, notwithstanding Sarkozy’s and Cameron’s triumphant visit to Tripoli, is not yet over. An estimated 15% of Gaddafi’s forces remain in control of a large triangle of territory in the western part of the country, with NATO forces maintaining their intense bombing campaign. While lasting resistance by Gaddafi loyalists appears unlikely, a violent breakdown along regional and tribal lines is a distinct possibility.

If this occurs, there will be no liberty or security in the country, but a war-regime. Then we can expect an outcome comparable to Iraq, where torture, by both insurgents and the government, continued regardless of Saddam Hussein’s elimination while U.S. authorities turned a blind eye, or Afghanistan, where President Hamid Karzai has conceded there was fraud in the country’s 2009 presidential elections, but that this was somehow organized by foreigners.

A more optimistic scenario would be a rapid and lasting return to peace and the secure establishment of the new regime. However, Libya has no tradition of political democracy and it is unclear what liberal leanings if any the new leadership, led by Gaddafi’s former Justice Minister, might have.

As a result, the best one might hope for would be something like the regime the Americans re-established in Kuwait after the 1990-1991 Gulf War. In Kuwait’s case, this happened to be an absolute monarchy. Europe’s and the West’s relationships with Libya would then most resemble its current ones with Saudi Arabia and the Gulf States: Ignore countries’ internal character, invest in and buy oil, sell arms, and (if so inclined) build military bases.

Awash with cash, armed to the teeth and holding well-greased connections with foreign powers, the new Libyan regime – like many other oil-rich oligarchies around the world – would be able to largely overcome domestic democratic tendencies. Then, it might be easy for whatever government emerges in Tripoli to monopolize the oil wealth, to keep elections ceremonial or even turn the armed forces against the people.

If these were to occur, perhaps only heavy media scrutiny and public pressure could provide the incentive for European governments to not place immediate material interest above the freedom of their southern neighbors.