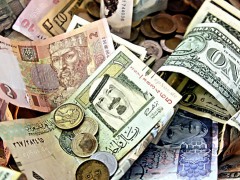 Everyone who has ever played Monopoly has wished they could be as rich as they were in the game or at least that they could use Monopoly money in the real world. Well, I offer you a place where this really happens: Argentina, where your money is only valid inside the country. Pesos, the Argentinean currency, is what I call Monopoly money. But let me explain:

Money bills from the Monopoly board game. Photo by John-Morgan on Flickr. CC BY 2.0.

The first advert selling a property in dollars in Argentina was published in 1977 in the wake of financial reform. As president Cristina Kirchner said, “From 1810 until 1977, Argentinians lived with a national monetary unit, but from then on it became a bi-monetary economic system.” Until only a couple of years ago, the dollar was the currency of Argentinean real estate. For this and other reasons, the current government decided to implement a policy controlling the flow of foreign currency in the country. How does it work?

Under this policy everyone who wants to buy foreign currency needs first to ask permission from the Federal Administration of Public Revenue (AFIP). This involves explaining why you need the money (to travel, for example) and how much you need – and the amount you state must be in line with what you earn. Ah, and you also have to supply proof of what you earn. AFIP then reviews your “application” and decides if you are allowed to exchange currency and how much you can buy.

With the permission in your hand, you can go to a currency exchange house and pay 6 pesos for 1 dollar (the current official exchange rate).

So far so good. But how does it work in practice?

– Usually, AFIP does not allow people to buy foreign currency. And when it does, the amount is never the same as what the person asked for.

– Not everyone has evidence of their income to show. For instance, informal workers, tourists and people who do not work but still have money.

– So, usually people resort to Plan B and buy parallel exchange dollars which are easily available in the country. The current rate is almost 10 pesos for 1 dollar (websites like this one shows all the current rates related to dollar).

In other words, it is extremely possible to have a lot of money in Argentina but not a cent to spend outside the country. Sounds familiar?

As a Brazilian raised in the post-inflation period, I have trouble in fully understanding such policies. My little knowledge about economics says that it’s not okay for people to spend so much in dollars (on houses, cars, etc) when the country currency is in devaluation. And I am aware that the Argentinian situation should not be blamed on one or two presidents because it’s the consequence of decisions made in the last century. But all of this raises one basic question: what is the future of national currencies in a globalized world?

Money bills and coins from all over the world. Image by epSos.de published on Flickr under Creative Common license: CC BY 2.0.

While I love to see how different the designs of money bills can be, I really hate exchanging currency. There’s always such a lot of bureaucracy involved and I always have the feeling that I’m losing money. So you can imagine how I felt traveling in the European Union: different cultures, languages and people, but all with the same money. Just how cool is that?

I find myself a little bit lost in a globalized world where countries exchange technology for commodities, and where carbon becomes credits. Shouldn’t the future of currency be the same? If countries achieve a more balanced economic level, won’t  it be easier to have the same bills and coins?

Many argue that the American dollar already represents a global currency, but when I say one common world currency I mean the one I can pay my bills with at my local bank and also use when traveling to Cape Verde. That would probably mean living in a world where all countries are part of a global economic free trade area… Oh, wait – because here we get to our issue.

Living in a globalized world and having Free Trade Agreements unfortunately doesn’t mean equality. Many Latin American countries said no to the Free Trade Area of Americas for a good reason. Portugal and Greece belong to the same union as Germany and Sweden, even if their economic situation is not the same. In other words,  FTAs are never unproblematic. As Daniel Roth wrote, “without transparency and participation agreements of this magnitude are no longer possible”.

So as much as I want a common currency for the world, I don’t believe it is possible (or even the best solution) in the near future. Perhaps one day my grandchildren will ask me what “pesos” and “dollars” were. Meanwhile, I continue to play Monopoly in Argentina, hoping that I won’t land in jail and that the bank doesn’t take it all.