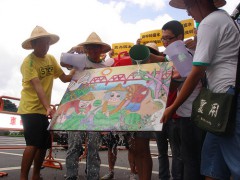 The Water Resource Agency (WRA)  recently issued a water shortage alert, but the downpour on the following day instantly solved that particular crisis. However, reports have come in that this downpour destroyed connecting roads in the mountain areas and caused great losses to crops. Taiwanese people used to refer rain to “gang-lin” which means “timely rainfall”. Yet climate change has now made the gap between the dry season (drought) and the rainy season (floods) even wider in terms of the amount of rainfall, and both drought and floods are disasters. Accordingly, Taiwanese people have become more ambivalent in their attitudes to water.

Students and farmers demonstrating the importance of water in front of Presidential Office. 2011-Aug-5. From Coolloud@Flickr, used under CC-BY-NC

Annual precipitation in Taiwan is 2,400 mm – which might seem lavish enough. However, with steep mountain slopes and over-development in the mountain areas, water torage is poor and most of the rain flows directly into the ocean. Moreover, the major reservoirs in Taiwan now suffer from 20%-30% sedimentation which further restricts their storage capacity. Owing to these negative factors, Taiwan, an island with high precipitation, ranks 18th in terms of water shortage among the countries of the world. Its annual per capita precipitation rate is only one fifth of the world average.(Source: Research paper)

In fact, abundant rainfall is no guarantee of water quality. With its fragile land formations and high incidence of typhoons and earthquakes Taiwan is a country vulnerable to disasters. To give just one example: intake of the Gaoping River was blocked by mud and rocks after the flood on 8 August 2009 making it difficult to transport water to the water treatment plant. Thus, in spite of abundant rainfall, people living in certain areas still had to face a water shortage.

Generally speaking, Taiwanese people should have  been more careful in their treatment of water resources, yet it seems that the government and the private sector have travelled on very different paths when taking measures to tackle water shortage.

The price of water in Taiwan is extremely low. The price of one unit of water is a mere 10 TWD for civil uses. But a low water price leads to high consumption: the Taiwanese consume 274 litres of water on average every year compared to the 155 litres of water consumed by people in Singapore. And water for industrial use is even cheaper because the Taiwanese government subsidizes the price of water for industy. Take the Sixth Naphtha Cracking Plant of Formosa Group for example -here water for industrial use costs them less than 4 TWD per unit. Taiwanese industry is reluctant to recycle waste water, so the recycling rate is only 30% while the recycling rate in Japan stands at 70%. Meanwhile, the leakage rate of tap water in Taiwan is 30%, while most advanced countries have a leakage rate under the 10% mark.

With such loose management of water resources, Taiwan’s total amount of used water is 18 billion metric tons per year. What’s worse, the government does not cap water use and even encourages the development of water-intensive industries which leads to the uneven distribution of water for agriculture and industry. The fourth stage expansion of the Central Taiwan Science Park located in Erlin Town of Changhua County consumes 160 thousand metric tons of water per day. When the water supply is not enough for industrial use, the government cuts down on the supply for agriculture to make good the loss. Thus, the range and amounts of crop yields have declined, giving rise to another predicament in the country which now has a mere 32% rate of of food self-sufficiency.

With the increasing demand for water, the WRA had no choice but to explore for new water resources and build reservoirs, artificial lakes and cross-basin water diversion projects. Nevertheless, Taiwan is a small and crowded island and there are fewer and fewer places left to be explored. Our forthcoming generation will have to face the challenge of living without untapped water sources. Every exploration is another eco-disaster in the mountain areas and will result in a vicious cycle of water resources. At the same time, the construction of reservoirs often causes flooding in the mountain areas, exacerbating the already tense relationship between local residents and the government.

In future, the use of water resources in Taiwan should allow for national land planning. Our government should regulate water consumption capping, reconsider industry policies, raise the water price by a reasonable level, ask industry to search for its own water, increase the waste water recycling rate, reduce the tap water leakage, and so on. In short, reducing usage rather than tapping new resources is the best way to achieve sustainable water resources.