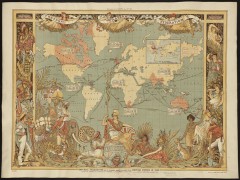 As a blogger for Future Challenges and the Global Economic Symposium I have spent much time working on issues of development and equality. For the last blog post on Britain, I want to show it as a country of contrasts – the sixth largest economy in the world with rising inequality gaps.

The British Empire in 1886. Boston Public Library (Photo by McClure and Co on Flickr, CC BY 2.0)

The United Kingdom is a country which has affected many countries politically, culturally and economically yet at the same time it has also been on the receiving end of the effects of globalization. In 19th century as ‘the empire on which the sun never sets’, it extended its political and economic control to the Americas, Asia, Australasia and Europe. Technological innovations like the steamship and telegraph allowed Britain to control its colonies and create an abundance of wealth through trade and commerce. In terms of the intertwined internal market of the Commonwealth, movement of people and the spreading of English culture, the British Empire was as close as it was possible to get to globalization in its time.

Nowadays, the British Empire is gone and thank God for that. Back to its initial island borders, the country can create its own economic development through its own national labor and advances of globalization. While in Scandinavia people believe that the wealth should be distributed very equally, in Britain there is a blind faith that if you work hard, you will earn a fair share based on your efforts.

Unfortunately this common belief does not reflect reality. While Britain is one of the strongest economies in the world, it also has the fastest rising rate of inequality of all Western European countries (OECD report). While it imports many cheap manufactured products from Southeast Asia, the standard of living has grown yet many services like call centers have been outsourced to low labor cost countries like India.

Wealth inequality in the UK

Britain is not poverty free and drastic cuts to the welfare system have exacerbated the divide between rich and poor. About 5% of the British population suffer from severe material deprivation, one in 10 of workers in the UK is now officially underemployed and over 3.6 million children are living on or below the poverty line. This is the same Britain which 100 years ago conquered a third of the world. Many of these statistics would be not so grim if wealth distribution were fairer and more equitable. The Inequality Briefing’s report shows that the gap between rich and poor is now the widest since the Second World War.

I have witnessed the 2011 England riots myself. The looting and violence woke up sleeping Britain to the havoc that inequality and poor access to opportunities can wreak. There is no single explanation about why the riots began but the LSE’s study of multiple factors – opportunism, perceived social injustice, deprivation, and frustration at the way communities were policed – paints a pretty accurate portrait of modern Britain.

Unfortunately it seems that the current British government has not learned its lessons, and still continues to dismiss the riots as ‘hooligan incidents’. There are ever more cuts in welfare programs and nothing is offered in exchange. Rather than actually tackling poverty and inequality, the 2014 general election will be waged around the ‘dangers’ of economic immigrants from Eastern Europe. This is a tremendous pity since migration is not the real problem. The real devil resides in Britain, not abroad.