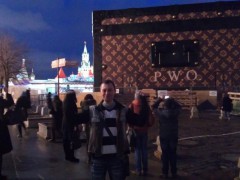 Imagine Red Square in Moscow with the colorful snow-covered onion domes of St. Basil’s Cathedral, the red bricks of the Kremlin, and the centuries-old cobblestones. They have all witnessed the October Revolution, the defeat of Tsarist Russia and countless military parades. Now imagine a giant 30-meter long two storey high Louis Vuitton suitcase in the middle of the square.

No one could have imagined that the famous luxury brand of Louis Vuitton would find itself in the epicenter of a major political and economic row in Russia. Featuring exhibits owned by the rich and famous like Ernest Hemingway and Nikolay II, the Louis Vuitton exhibition was supposed to donate all its proceeds to charitable organizations in Russia. Yet after a giant LV suitcase was installed in front of the Kremlin in mid-November, the Russian blogosphere turned into a battlefield between supporters of this advertising/charity campaign and those who were insulted and outraged by it. The noise of waring factions has reached the ears of government and it then appeared that the oversize suitcase was in violation of administrative regulations and thus sent packing.

You say it’s a public space, I say it’s capitalism. The suitcase on Red Square, a UNESCO-protected area, has brought to light various political and economic undercurrents in our society. On the one hand, it is a true symbol of economic integration and the inevitable march of globalization as it is impossible to imagine such a marketing campaign under the old USSR. On the other hand, Russian authorities have yet again proved that they can reverse time and change any rules just as they feel like. First, they allowed construction of the pavilion and then in the face of public outrage refused to take any responsibility for it.

After the collapse of the USSR, the country was flooded with fake Louis Vuitton and Dolce&Gabbana bags and clothes. For many Russians these brands are a symbol of the nouveaux riches. During the turbulent 90s, Russians had their first taste of capitalism. The period was marked by the rise of illegal commerce and entrepreneurship, and the birth of modern day corruption and banditry. Now the giant LV suitcase has become a symbol of such dramatic transformation.

Such capitalist integration and economic transformation don’t match the recent trend of political isolationism and rising nationalism. The government is now trying to invent a new national identity to unite the country. Yet by flirting with nationalism and encouraging religious bigotry, the country’s leaders are playing with fire. People can plainly see the absurdity of fat cat politicians leading  a lavish champagne lifestyle while preaching traditional values and even asceticism. It doesn’t make any sense. And now they’re on the receiving end of a backlash for defiling the ‘sacred’ status of Red Square with a giant LV pavilion.

Even so, the square stopped being sacred a long time ago. As Alexey Ametov, a CEO of Look At Me, points out:

“The main city’s square looks like this: there is one of the most expensive shopping malls on one side and […] a mummified corpse [of Lenin] on the other side, and we have concerts, parades, and a skating rink for residents in winter between these extremes. And everyone is trying not to think about it, only unusual events […] can wake residents from the trance.”

Notorious for its crusade against human rights and freedom of speech, widespread virulent homophobia and support for “traditional values”, at the same time the government is trying to take on the mantle of a modern, technologically advanced country. This mismatch of ideas has already scared off some foreign investors.

And it’s impossible to imagine a healthy economy without committed investors. Russia has experienced a drop in net capital outflow since 2008. Experts claim the crisis in the eurozone together with the unfavorable investment climate and high levels of corruption in Russia have caused a capital flight of USD80 billion in 2011 and USD54.6 billion in 2012. Due to the unpredictability of country’s political regime and murky business rules the Louis Vuitton pavilion was first installed and then dismantled. As it turns out, entrepreneurial success depends exclusively on a company’s ability to negotiate project details with Russian authorities. This dismal approach isn’t exactly going to improve the market situation in a country lagging behind in economic development.

This lack of economic transparency may cost Russia its financial stability and rob it of its growth. Even though the LV demon was routed, Russian opposition leaders and bloggers shouldn’t feel empowered by the fact that their active online campaign against the suitcase has brought some fruitful results. Clearly the problem isn’t with Louis Vuitton, but the government that changes the rules in the middle of the game.