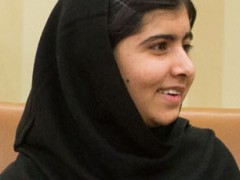 By reading this title, you might be wondering what in God’s name I mean by “Taliban 2.0.” Well, they are the people among us who pretend to be progressive but leave no stone unturned when it comes to being apologists for the very ideology Taliban carry out. You see, I don’t believe Taliban are the only people openly taking up arms and committing acts of terror against innocent people. No! It’s beyond that. The Taliban’s is a sort of ideology that has been around for ages. There have always been people living among us who support the very ideology we all loathe. Now equipped with digital technologies, these people are operating on a whole new level – the next level, if you will – hence, “Taliban 2.0.”

Teenage education equality activist Malala Yousafzai – whom you might also know as the girl who was shot by Taliban – has come under attack once again. The recent controversy in Pakistan mostly surrounds around her book, I Am Malala. She is accused of something as grave as committing blasphemy merely for petty issues such as the book not “carrying the Islamic salutation ‘peace be upon him’ where the names of Prophet Mohammad (peace be upon him) are mentioned” among others.

Unless you’ve been asleep or living under a rock, you know by now that Malala Yousafzai has been made a controversial figure within Pakistan, mostly by the keyboard warriors on the Social Media. It’s not just the social media though! If you talk to urban middle-class people in Pakistan, you see extremely polarized views, many of which are heavily based on conspiracy theories.

Other objections include instances where her quotes have been twisted. For instance, there is one where she mentions that her father found Salman Rushdie’s anti-Islam book offensive but believed it to represent freedom of speech.  In response, critics have said that Malala is merely a tool being used, or rather abused, or even exploited, by the ‘evil West’ for its own agenda. The conclusions put forth by Taliban 2.0 are that she has maligned the image of the country and tried to make us look bad – as if we had a presentable image in the world at the moment. If anything, Malala’s work has boosted the image of the country with the perception that even in the war- and terror-stricken areas in Pakistan, brave and vibrant people like Malala exist.

Almost all of the things being said by this faction of the society are either misunderstandings or purposeful accusations intended to discredit Malala’s work. Lists of all of those accusations along with detailed rebuttals to each are available at this blog.

This is the bottom line: This war on terror will take a lot more for Pakistan than just a number of battles. We are up against a mindset, an ideology that believes in the use of force – no matter how ruthless – in order to impose its agenda. Why is it no surprise that the heads of two Islamist political parties that have elected members in assemblies have openly called the Taliban commander killed in the recent drone strike a martyr. Maulana Fazalur Rehman went one step farther by saying “even a dog would be considered a martyr if it’s killed by Americans and Jews.” Well, what do you know: this little blog post of mine would then also be considered to be the words of a Jewish agent.