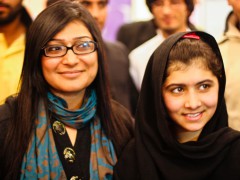 Many critics claim that Pakistan takes global centre stage when it comes to horrific news, and tales of terrorism and corruption. But less is written and talked about the human gems this small place keeps giving birth to, and the many people who fight and struggle hard not only for themselves but for all those around them.

Pakistan caught some positive limelight during the last few months when Abdul Sattar Edhi (a key pillar of the country’s philanthropy) was nominated for the Nobel Peace Prize. We also managed to grab some media attention when a 10 year old girl wrote diaries for the BBC during the time the Taliban held a savage stronghold in Pakistan’s north-western Swat region. This girl, who then was fighting for the education of girls in the teeth of bitter Taliban opposition and has been doing so ever since, was shot in the head and the neck this month along with two of her fellow students when returning home from school. She was successfully operated on and is now making a slow and steady recovery.

This is not just the story of Malala nor is it specific to Pakistan. Across the whole globe, women activists are being attacked, harassed and intimidated – with Egypt and the Arab uprising in general offering only the most recent examples. While those pro-Taliban elements condoning such violence argue that “these women are Western agents acting out in front of cameras and gaining public attention”, anyone with a modicum of sanity can see how spurious and clouded by prejudice and hatred such views are.

The Taliban have threaten to attack Malala again if she survives for  “speaking against the Taliban and promoting Western culture in Pashtun areas.”

“I was scared of being beheaded by the Taliban because of my passion for education,” she once told CNN.”During their rule, the Taliban used to march into our houses to check whether we were studying or watching television.”

My first encounter with this amazingly talented, vivacious and astonishingly mature girl happened last year in Peshawar during a Take Back the Tech event where I training people in digital security. Malala was very eager to learn about using digital spaces for her cause and for maintaining a secure digital presence.

Me (left) and Malala (right) during one of the TBTT sessions

She told me that she had deleted her own personal profile because of a profusion of fake profiles, and never used social media for her cause because of the many threats and security issuesit involved. Despite being threatened by the Taliban, Malala continued to attend school and campaign for girls’ education. But how long could she or anyone else in her situation survive alone in such a critical environment? Here we must commend the efforts made by the Pakistani government and the aid offers from the international community for the girl’s speedy recovery. She was shifted to the Queen Elizabeth hospital in Birmingham, England, on the advice of doctors here, but with the serious head wounds she received her progress has been slow, if not totally disheartening.

It is high time for world leaders to come together and provide a secure environment across the globe to human rights activists, especially those in sensitive locations. Without strong policies in place, these terrorists will simply keep on wiping out innocent lives and intimidating the minds and spirits of children.

Another aspect of this really depressing episode is the local response shown on social media, blogs and newspapers. From initial shock and pointing the finger of blame at the government for its failure to maintain law and order to outrage and hatred of the assailants, the inter-web was seething with emotion. But it took local conspiracy theorists only a few hours to change that emotion into skepticism and criticism of the girl herself and to weave a truly sickening web of counter-narrative.

While people across the country were holding prayer vigils for Malala, the right-wing began spreading fake photos and conspiracy theories. Dr. Samia Qazi, leader of women’s wing of the Islamist party Jamaat-e-Islamia, tweeted a photo of Malala sitting with former U.S. special envoy to Af-Pak, Richard Holbrooke and tagged many prominent journalists.

The said meeting was a UNICEF organized event in July 2009 and Malala was invited as a celebrated child activist along with many other grassroots activists working in Swat to discuss the education infrastructure in the wake of the military operation in the region.

Right-wing columnists and political commentators expressed sympathy for Malala but then immediately went on to accuse the Pakistani military, the CIA and the U.S. government of exploiting the girl’s tragedy to gain support for the war in Afghanistan.

In an interview with  CNN last year, Malala was asked that why she risked her life. She said, “Because, I thought that my people need me, and I raise my voice because if I don’t raise my voice now, when will I raise it?”

This small but extremely brave 15 year old, who has been attacked, judged and assaulted both in her real life and her online lives, is a National Youth Peace Prize winner and a nominee for the International Children’s Peace Prize. But such honours don’t mean that a young girl deserves to be subject to such callous treatment.  At the very least international and national communities should be more sensitive to the child’s age and look long and hard at the accusations they heap on her. Media outlets never spared a thought for the privacy of the young activist and kept broadcasting images of her injuries.

While we sit and pray for her steady recovery, the need for proper international policies for digital security and the privacy of activists is also very much the need of the hour.