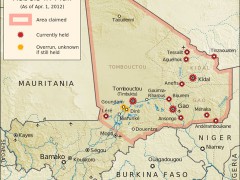 As political chaos chokes Mali’s hitherto long-standing democracy, many are wondering how the West African country will deal with a triple dilemma of the Sahel food crisis, civil upheaval and secessionist claims.

On the 22nd of March 2012, the government of Mali was toppled! Armed soldiers took over the control of government and created another political headache for the Economic Community of West African States (ECOWAS). This has been very unwelcome, coming at a time when former Senegalese president Abdoulaye Wade had just conceded defeat in elections after altering the country’s constitution to make way for a third term.

The problems of Mali are multilevel and will require complex solutions. Since 2011, there had been upheavals in the north, on the back of the ouster of Libyan leader Muammar Al-Gaddafi. The two countries had enjoyed a long-standing relationship that flourished on Mali’s ability to provide Libya with agricultural land and other natural resources, while Libya reciprocated with infrastructure and funding for the poor, land-locked Mali. The two countries were so close that, at the height of Libya’s revolution last year, the Libyan national football team played some of their home matches in Mali, far away from their traditional Tripoli grounds.

A humanitarian crisis has been created in Mali with refugees fleeing into neighbouring Niger. Reports indicate that an estimated 200,000 people have fled so far. This forced migration has threatened to compound a deep food crisis already besetting the entire Sahel region, encompassing both Mali and Niger. About 3.5million people are feeling the effects of droughts and food shortages, with projected  impact reaching about 15million people in the future.

The complex political issues lie at the heart of the return of Mali’s Tuareg rebels who fought last year alongside Gaddafi’s forces in a bid to maintain the dictator’s stranglehold on power. After Gaddafi had been killed, the rebels returned home to Mali, armed with the weapons of combat. They formed a movement called the MNLA – Azawad National Liberation Movement – and reignited hostilities aimed at forming an independent state. Azawad is the Tuareg name for Mali’s north.

As I write this, news has just broken that the rebels have announced independence for the Azawad region. The rebel website in French, carries a full-page declaration signed by General-Secretary Billal Ag Acherif.

The Malian government was stretched thin after focussing its meagre resources on finding food for the population. Subsequently, it was difficult to find more funding to help the country’s army fight off the Tuareg insurgents in the north of the country. The dissatisfied army retreated from the north and took over the government in Bamako.

The difficulties worsen with the uncoordinated presence of the MNLA and Ansar al-Dine in the north. The latter group is a known ally to AQIM, (Al-Qaeda in the Islamic Maghreb). MNLA claims it is secularist and wants an independent state only, while Ansar al-Dine wants to impose a Sharia state in Azawad. While all this goes on, millions are starving and fleeing a Sahel region seemingly on fire.

Farhan Janjua intimates in his article Disaster for Democracy that natural disasters are very suitable agents for the entrenchment of extreme forms of government. In Mali, the ripple effects of a silent natural crisis have spilled over into the seat of government. As the world looks on, a complex situation unfolds that has eroded Mali’s democracy and will take more than just a moderate political will to resolve.

What will the ousted Amadou Toumani Toure do to regain the trust of the seceded north if he is reinstated? How will Mali handle a necessary disarmament of the Tuareg rebels? Will this disaster be the end of Mali as we know it, or democracy still has a chance after the disaster? In all this, what will happen to people who daily feel the effects of a worsening drought and food crisis?