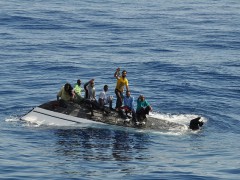 As migrants keep arriving at the borders of the European Union, EU countries will soon face a hard choice. They will either risk a social crisis by carrying on with their foreign policy that lacks deep-cutting engagement such as serious military involvement and state building in conflict zones and better supervised aid programs or they will come up with a much more active strategy that deals with the causes and not symptoms of the current migration patterns.

Traveling from Budapest to Serbia, what strikes you first is how the streets of the once sleepy border town of Subotica are crowded with migrants trying to enter the EU through the porous border between the two countries. Passing through the town on a Wednesday evening the once quiet streets were full of people swarming from the coach station towards the Hungarian border.

Seeing this spectacular flow of people, it becomes quite clear that the building of a new fence on the border between Serbia and Hungary, announced by Hungarian prime minister Viktor Orbán, may draw some votes for the governing party from those who fall for these politics of fear, but it will not solve the problem itself. As thousands of people risk their lives crossing the sometimes deadly Mediterranean sea, a 4 meter-high fence on the Hungarian border can even be a comic, but a certainly futile attempt to keep migrants outside EU borders.

Risking everything to get into the EU – An image by Coast Guard News on Flickr – CC BY-NC-ND 2.0

As many EU countries still struggle to integrate minorities from a non-European immigrant background, the arrival of yet more migrants with a totally different cultural heritage is often framed as an agent of deepening social challenges and a break-down of social cohesion. Besides, it could also upset the crumbling welfare systems of these states. The fact that these very welfare systems are already in crisis from the effects of globalization and from ageing populations shed further light on the complexity of this issue. Part of the problem is that in order to please their domestic electorate European governments make it hard for migrants to find employment and contribute to welfare systems, leaving them at best a burden and more often wholly outside the mainstream economy. A self-defeating strategy.

As the infrastructure for migrants is already overburdened in most EU countries member states will face tough questions. A recent story with German chancellor Angela Merkel demonstrates that sending back migrants to their country of origin could be trickier then most of us would think. This case of a Palestinian girl living and learning in Germany is a good example for the questions we face. Deporting thousands of people who were in such a desperate situation that they chose to leave their home and families behind to start a new life in a totally different country lead to very hard, sometimes inhumane outcomes.

Another solution would be to prevent migrants from coming to Europe in the first place. But simply targeting organised crime groups profiting from the desperation of migrants only simplifies the problem. Organised human traficking is partly a result of ever stronger border crossing regimes for non-EU citizens. Besides, as long as people need to leave their homes behind down to hopeless economic perspectives, oppressive regimes or ongoing military conflicts, some migrants will keep arriving to our borders, whether we like it or not. To decrease the flow of people searching for a safer and better future, the primary focus should be on the root causes not on the symptoms.

That would mean dealing with tyrant regimes such as the ones in Eritrea or Sudan. Besides, this would also mean pacifying ongoing conflicts such as the one still unresolved in Iraq, Syria, Libya and Afghanistan.

In today’s globalized world winning a war may still lead to losing the peace. The lives of soldiers and civilians has never been so precious in history. Losing a handful of soldiers in Somalia meant the pull-out of US and UN forces from that country in the early 1990s. Moreover, with global media networks ever present in conflict zones, the hands of militaries are increasingly tied as well. What may have lead to less human casualties both on the military and civilian sides of conflicts in the past decades, also resulted in more limited engagements.

On top of all these, as a result of the Iraqi fiasco and the Great Recession, western countries may never been so cautious when making decisions about putting boots on the ground, as the case of Libya clearly demonstrates.

Tragically, spilling the blood of our soldiers may still be necessary. As NATO could not bomb Libya into a peaceful democratic state, sanctions have not triggered regime change in various dictatorships from Sudan to North Korea either. Radically more active aid and development regimes are still vital, but we have to keep it in mind that development takes a long time and success is not guaranteed.

It seems Europeans will have some tough decisions to make. Either we will accept the fact that we will need to make room for people fleeing from war and poverty in different parts of the world. Or we need to start spending huge amount of financial and human resources (yes even the lives of our own soldiers) to deal with the root causes of global migration.

This may prove to be too big a challenge for a nearly bankrupt Europe with a colonial past.