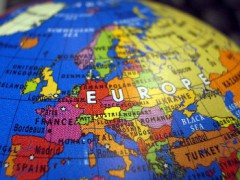 The term migration is usually associated with the movement of 25+ year old people driven by changes in the economy. Yet there is another type of migration which is as equally important but  often neglected in the literature. With the 2004 enlargement of the European Union millions of young people from Central and Eastern Europe were able to take university degrees in Western Europe much more easily than before and thus increase their life opportunities. Below I present interviews with three young people who decided to study for a degree at the University of Birmingham. My thanks go to EB (Lithuania), LL (Latvia) and TS (Germany) for sharing their stories and talking about what drove them to leave their home countries for the Birmingham Bullring.

What was your motivation to study in the United Kingdom?

EB: Firstly, I was motivated to challenge myself and study in a foreign language. Secondly, I liked the possibility of combining different disciplines in a degree which British universities offer. And lastly, the United Kingdom is famous for the quality of its higher education all around the world and I thought that my employment chances would increase as a result of studying in the UK rather than staying in my home country.

LL: My motivation to study in the UK was influenced by the fact that continental Europe holds UK universities in very high esteem.

TS: My brother was studying in Britain, this was one factor. Another reason was the ‘prestige’ of studying in the UK.

To what extent did economic reasons empower your decision to migrate?

EB: Although I was eligible to apply for a tuition fee loan, I was not able to apply for a maintenance loan or grant. This meant all my living expenses had to be covered partly by my parents and partly by my part-time employment. On the other hand, the job prospects after getting the degree in Britain are also considerably brighter and this definitely has been an incentive.

LL: As a 17-year-old in the last year of high school, I was, of course, not worried by economic considerations of any kind.

TS: Economic reasons were not a driving factor in my wanting to study in Birmingham.

How do you feel when you return back home?

EB: When I return back home, I feel less connected to my previous life in Lithuania, my home country. I no longer have as many acquaintances and friends there as I used to have. Sometimes I feel nostalgic and make plans to move back and work there, and at other times I just feel that I should go back more often to feel more connected to the country, my parents and friends.

LL: It’s very difficult to describe the spectrum of feelings that one experiences during a long vocational stay at home.  Like all human feelings in absolutely any situation, these feelings can range from happiness with certain aspects of life to dissatisfaction with other instances.

TS: I am glad to be back and can finally relax.

How did migration affect your cultural identity? How did you identify yourself before and after you migrated?

EB: I guess that I identify myself as Lithuanian more often now because here people often ask me where I come from. At the same time, however, I feel more ‘a citizen of the world’ because during my 4-year degree I studied in the UK, Spain and France. I used to have one identity before and now I have multiple identities that coexist: identities as a Lithuanian, a European and a world citizen.

LL: Cultural identity is a very vague concept. Given that I have never believed it possible to define a “cultural identity”, I do not believe that migration has had any great impact on it. The question of self-identification before and during migration does not apply in my case.

TS: It affected my identity greatly. My mother is English (of Irish decent) and my father German. Before moving here I identified as equally English and German, however after living in Birmingham for 4 years I no longer identify myself as English due to fundamental ideological differences between us.

What are your plans after graduation? Do you intend to go back to your home country?

EB: I am planning to continue my education by pursuing a Master’s degree in another European country, Denmark. I do not intend to go back to my home country to work in the next 10-15 years because I would like to pursue an international career and would only consider going back home if there are adequate opportunities available there.

LL: At the moment, it’s difficult to make any plans for the time after graduation, because I haven’t even taken my exams yet.  I am a fatalist, so I intend to go with the flow of my life. I do not know if it will lead me back to my country of origin or somewhere else.

TS: If I get a very well paid job in London then I could live there, otherwise I will either move to Madrid or back to Germany, preferably to Hamburg.

In short, British universities are considered to provide young people with a wealth of opportunities. There are currently hundreds of thousands of young Europeans studying in Britain and it is unknown whether this trend will grow or decline. Even so, in some cases it might be just an incredible educational experience while in others it might be the start of permanent residence in Britain. In all cases though it’s full of the ups and downs many young people make in the course of their journeys nowadays – studying, working and living anywhere they want to.