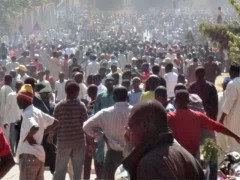 A few days ago I saw a link to a video about some ‘retribution’ meted out to a shoplifter at Shoprite, not sure if it’s Lagos or Abuja at this time.

The video starts with a lot of people screaming and a young lady who’s had most of her clothes ripped off, held by a young man who appears to be shielding her from the mob. She’s crying. The chanting is inaudible and then the video goes blurred for a few seconds. By the time it’s back she’s completely naked, crying even harder, and trying very unsuccessfully to cover her breasts and privates with her hands, and also stop the thronging mob from touching her.

I have tears in my eyes at this point, the scene is reminiscent of people poking at a caged animal. I wonder if there aren’t any police men at the mall.

It gets worse; the lady trips and falls. I find myself asking, ‘why on earth are they trying to carry her’?  My answer lies in the next few seconds. She’s lifted, legs spread wide apart, and unhindered, some of the men start to touch her breasts and vagina. Others are content to film, take pictures, laugh and/or scream. I’ve had enough, but the video’s just about done too. All of three minutes and nine seconds, but that young lady will live with the trauma of this incident for the rest of her life.

This incident isn’t novel, neither is it isolated. We have become so disenchanted with our legal system that we have become judge and jury unto ourselves; we’d rather distribute punishment ourselves, and in the most barbaric and dehumanizing of ways. I could regal you with tales of close friends who narrowly escaped lynching, or some other mob action, and they were innocent!

Very recently our sensibilities were jarred by the murder of four students in Aluu, a hitherto unknown town in Rivers State, Nigeria. Details are still sketchy but the most popular story has it that the four young men, students at the University of Port Harcourt had gone early in the morning to recover a debt owed one of them. The debtor didn’t have the money and in the argument that ensued, started shouting, ‘thief thief’. Like ants to sugar, a crowd gathered, and without inquiring, the boys were rounded up, stripped, paraded through the town, beaten, clubbed, and then burnt. Horrible. Simply horrible.

Since a video of the gruesomeness went viral, countless individuals and groups have called for the prosecution of the mob that killed these young men. Movements have been born, hash-tags have trended, and the emotion is almost palpable.

I joined one of such movements on Friday, the one calling for signatures to pressure the National Assembly to pass a bill outlawing mob action. It was started by @ofilispeaks, and currently stands at just under 3, 500 signatures, including mine.

Then, riding on the pent-up emotions from the video of the young lady I watched, I wondered to myself how I could help drive the campaign even further. I spoke to a very close friend of mine, a lawyer whose years of practice are a year shy of my age. My conversation with him? Let’s just say I did a U-Turn at the end of it.

Popular sentiment aside, we cannot ask for a new law addressing ‘mob action’ because embedded in our Criminal Code (for the South), and the Penal Code (for the North) are laws covering the act against the #Aluu4 – murder.

Matter of fact, we could tease out a minimum of five charges against the mob. Let’s start from,

Are there provisions for each/all of the charges within Nigerian laws? Yes. Last I checked, more than ten people have been arrested and arraigned over the murders, further confirming that what we have is not a lack of laws, but the moral courage to effect them.

We lack the equality before the law which is why we made such a song and dance about #Aluu4 but just whisper a prayer for the souls that perish by the day via the floods, bombings, or the several violent cries rocking Nigeria at the moment.

We lack education, basic civic education that teaches us to respect life, human rights, and instills in us a natural abhorrence for mob action, or other expressions of jungle justice.

That, my friends, is what we should campaign about.