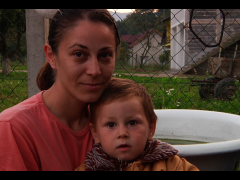 Several years ago, my middle-aged father was chopping wood in the forest behind our country cottage. After not returning home on time, my mother went out searching for him. As she got closer to the forest, she heard his screams. It turned out that a tree had fallen on his leg, crushing it. He was unable to move. My mother called the neighbors for help, and together they dragged him out of the forest on a blanket. It took several hours. By the time they reached the car and got him to a hospital, his leg had swollen to several times its normal size. The doctor came to look at him, and pronounced that his leg was broken in three places. He would need surgery.

Then the worst news came: it would be several days before they could operate on him. In the meantime, they said, they would put a cast on him, and he would have to wait – meaning that he would be in agonizing pain for days, with the risk of infection and without being able to move or get up and go to the bathroom. This had nothing to do with the hospital’s capacity. Rather it was ‘business as usual.’ I didn’t have to think twice: I would pay them a significant amount of money. In order to save my father, I had to directly participate in the chain of corruption. I didn’t have any other choice.

As soon as I slipped the doctor the money, my father was scheduled for surgery the next day. I also paid the head nurse, so that he would be attended to in the post-operating room. This was a process I remembered well from when my father was ill with cancer in 2008, when I was told repeatedly that he would have to wait a month for treatment. Yet if money changed hands, the waiting period would suddenly be reduced to three or four days.

In Bosnia-Herzegovina if you can’t pay, or if you don’t have a special connection in the hospital, you can easily wait several months for simple essential treatment. Officially, my father receives a state pension and is entitled to free or very low cost healthcare, especially in the event of an emergency. Clearly, the system is broken when those who have health insurance are not able to benefit from it.  Apart from corruption, another issue is that only those who work full-time and pay into the system, or those who receive state pensions, are entitled to healthcare. Those who don’t have health insurance (and even those who do!) choose to pay private practitioners if they can afford them, because it’s faster. If not, too bad, they are out of luck.

The cause of corruption in the medical industry in Bosnia is complex. The first and primary reason, I believe, is related to the fact that corruption is rampant on the national level. State medical practitioners are able to take advantage of the prevailing atmosphere of corruption in which their behavior is normalized. There is no monitoring system in place to ensure their compliance with an ethical code. To make matters worse, directors in hospitals often have ‘lifetime’ appointments. Another reason is that, in many cases, doctors have their hands in politics, and are often more concerned and involved in developing their political careers than practicing a full-time medical one. In some cases, medical practitioners are underpaid, and therefore may be able to justify and participate in a system of bribery. In other cases, the cause is merely greed: considering how low the cost of living in BiH is, most doctors’ salaries, though far from making them wealthy, are not so bad. In any case, the combination of factors has caused many doctors and nurses to forget the reason they are there in the first place: to save lives. Even if a medical practitioner enters the profession with the will to be honest, there is great pressure put on them to do things ‘the easy way.’ The result of all this is that healthcare in Bosnia is one of the most corrupt sectors in the country, next to politics.

Most people in Bosnia do not have access to quality healthcare, and in many cases to any form of healthcare, period. A poor person can die in the hospital, and no one will blink an eye. When my father got cancer, I went to the hospital dressed in ordinary clothes. I got nowhere when I enquired about his treatment. No one wanted to speak with me. Yet when I returned dressed in more expensive clothes, I was immediately of interest to them. The doctors and nurses look at how you are dressed to determine how much money you have or how educated you are. Because of this, poor, rural people have extreme difficulty in gaining any access to the healthcare system.

Of course, if corruption as a general problem in the country was solved, the healthcare profession would have to reform as well. For example, simply setting up an unbiased anti-corruption committee to monitor and regulate the profession would be a good start. Another solution would be improving access to economic opportunities in the country, a problem which also needs to be solved at the governmental level.

In other words, since neither governmental nor economic reform in this country is going to happen anytime soon, medical reform is also doomed. In the meantime, patients will continue to go to the hospital to receive chemotherapy, only to be told the machine for radiation does not work…until they pay. Then, and only then, will the machine be ‘fixed.’

Above: Citizens of Bosnia-Herzegovina, a woman and her child, represent those who deserve equal and fair access to quality healthcare. Photo by Mirko Pincelli